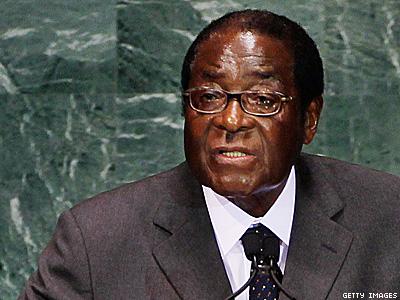 Robert Mugabe promised that Zimbabwe will not tolerate Western ideas about the equality of LGBT people, nor will it welcome diplomats who share those perspectives.

“We did not fight for this Zimbabwe so it can be a homosexual territory,” said the 90-year-old president, who has ruled the country since it gained independence from the United Kingdom in 1980. “We will never have that here, and if there are any diplomats who will talk of any homosexuality, just tell me. We will kick them out of the country without any excuse. We won’t even listen.”

The president made his remarks at the National Sports Stadium in Harare during the annual independence day celebration. Mugabe’s long history of homophobic rhetoric is well-documented: He has often said LGBT people are “worse than dogs and pigs,” and last year he suggested the state should decapitate gay men and lesbians if they do not produce children after being locked in a house for five years.

“Some years ago, l was warned that there was some secret organization of that nature which was addressing young men … to join them as homosexuals,” said Mugabe. “This nonsense from Europe, keep their homosexual nonsense there and not cross over with it.”

The president-turned-despot also criticized Western efforts to penalize homophobic laws in African nations, pointing to the Uganda, which saw cuts in foreign aid and a weakening national currencyafter its president signed into law the Anti-Homosexuality Act, also known as the “Jail the Gays” law.

“If you pass a law that rejects homosexual marriages, ‘we will punish you’ like what they are doing to Uganda and us,” AllAfrica quotes Mugabe as saying. “And they say they want you to believe that if a man gets another man and they have a homosexual relationship, they have human rights to do so. But that act is inhuman. It’s not human and human rights cannot derive from acts which are inhuman. That does not exist in jurisprudence.”

Same-sex sexual activity is illegal in Zimbabwe under still-enforced colonial-era antisodomy laws, and a a2006 law banning “sexual deviancy” criminalizes any actions perceived to be homosexual, including two people of the same sex holding hands, hugging, or kissing. The government regularly carries out targeted attacks on LGBT activists and organizations, notes BuzzFeed. In 2012, 44 members of advocacy group Gays and Lesbians of Zimbabwe were arrested, and last June troops loyal to Mugabe raided the organization’s offices.