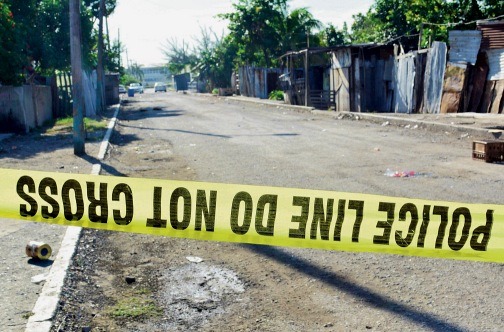 IN the mid-1990s when I met him, the glory of his past was as faded as an old copper coin. He was living in a room upstairs a burnt-out concrete and steel building on Oxford Street in one of the grittiest parts of downtown Kingston.

The thick wrinkles and deeply etched lines on his face said very loudly that age had been unkind to him. By that time folks knew him simply as “Old Man —— “, and although the man who took me to see him spoke about him in glowing terms, as if he was some hero of a well-celebrated revolution, all I saw seated on the single bed with a piece of cardboard on the spring for a mattress was a broken old man.

The walls of the small room were charred in places and the remains of the white paint on it were heavily flaked and falling away to the floor. A few feet away from his small bed was a knocked-together wooden table where he had a few plates, a single spoon and his ganja pipe contraption.

He reached for the pipe and asked me for money to buy ‘weed’. He immediately shouted out a name and a young boy came running. A few minutes later the boy returned with the ‘weed’ and he began to tell me a tale of murder and mayhem in the days when he was ‘somebody’.

I immediately realised that feelings of remorse would have been too heavy a burden for him to bear. Totally dispossessed and living in material wretchedness, only the memories of his criminal past and whatever glory he could bring back from it kept him going.

As he began to open up he passed the pipe to the friend who took me there and he took a long draw and handed it back to him. “Old Man —— ” pushed the pipe towards me and I said, “When I was in my 20s I tried it in a yard in Waterhouse and it lick mi fi six. Mi fraid a it.”

He clutched the pipe and pulled on it again. The room filled up with the sickly sweet smell of Jamaican ganja.

“Yuh remember ‘B…..’ who use to fire gun fi…,” he asked. “Is me dun him.” I remembered the notorious name he called, but I had no way of knowing if he was simply embellishing his past to magnify his misdeeds in

As the weed worked its way through his system, and I sipped on a beer the youngster had bought for me, the old, faded thug told me about an altercation he once had with a man on McKoy Lane in the late-1970s. According to him, the man had “dissed” some “programme” and he was warned.

“Dah day di bwoy come because mi sen fi him. Him never know seh mi serious. As him walk up mi just jam mi long knife inna him belly.” According to him, as the man ran off he shouted: “Hey bwoy, whe yuh a go wid mi knife! Di buay come back to me and mi draw di knife outa him, wipe di blood pon him pants, an’ tell him fi gwan now.”

By then he was smiling as he told me that the man walked about 50 yards before falling to the ground dead.

It was either last year or the year before that “Old Man …..” died. His funeral was well-attended, but it didn’t have the heavyweight politicians like that of south St Andrew PNP affiliate and alleged head of the Black Roses Crew “Willie Haggart”, which attracted at least three full PNP Cabinet ministers and, before that, JLP affiliate based in Tivoli Gardens “Jim Brown,” father of “Dudus” whose funeral brought out cream-of-the-crop politicians in the JLP.

In Jamaica politics is discussed on every street corner and gathering and, because of its link with a criminal past, discussion of the criminal ‘heroes’ of the past follows naturally.

I find it most hypocritical that whenever politicians address the nation or issue press releases on the troubling wave of criminality, they conveniently distance themselves from the nasty politics/gun nexus, which was the norm in the past, and somehow expect us to take them seriously.

Now, I do not expect that every time a politician speaks on crime he should bleed out his soul for the transgressions of his former leaders and party. But to date, from my recollection, only two politicians are on record for clearly articulating the destructive political links of the past, and they have been Bruce Golding of the JLP and, to a lesser extent, Peter Phillips of the PNP.

So pervasive is the criminal hero to the many undereducated, idle and unemployed youngsters, that many proudly claim either made-up family links with notorious criminals or “Mi meet him aready yuh kno’. Is a nice man.”

Even more troubling is that a well-known journalist was mentioned by US authorities as having been in the pay of the CIA some time ago and was a gunrunner at the time and beyond for one of the most notorious criminal outfits in Jamaica. And, I have been told that he idolised the badness.

With the Commission of Enquiry into the security forces’ operation in Tivoli in 2010 and the subsequent deaths of 77 people about to come on stream, I am certain that the JLP and whatever link it may have to organised criminality that was an integral part of Tivoli Gardens will not only be highlighted, but the ‘badness’ culture among our youth will be detailed.

Where there are no Jamaican versions of Malcolm X and Martin Luther King Jr and Nelson Mandela, the youth, uneducated in the formal sense and lacking knowledge of where they ought to be heading, look to the streets, and it is there that they find their heroes. Those heroes are area leaders, popular DJs with links to the gun subculture, criminal dons, and even rogue policemen.

Where the present politics has never formally disassociated itself from the criminal street elements, it is highly suspected that the link has never been truly broken.

Many of the young men I speak with cannot place into context a pleasant and viable future for themselves in light of what they see happening around them. “It bun mi heart when mi hear seh police tek weh di man dem weed,” said a youngster to me recently who admitted that he farms a small plot. “Mi nah lie,” he said. “Mi nuh have nuh gun, but if all ah man go tek whe my tings, mi wi just get —— fi deal wid dem case.”

Another youngster nearby, hearing him call the name of an ‘enforcer’ said: “Ah mi fren dat yuh know. Anytime mi bruk mi just check him. Him cool, man. Him is a humble man.”