ABUJA — Barely 24 hours after the Peoples Democratic Party, PDP, formed a forum for its governors, seemingly to break the ranks of the increasingly influential Nigerian Governors’ Forum, NGF, the Presidency flexed its muscle, yesterday, with most of the governors backing down from a showdown. This effectively whittled down the powers of the governors forum.

It was gathered yesterday that the Presidency has infiltrated the ranks of the governors and has broken their resolve to rally around Governor Amaechi. 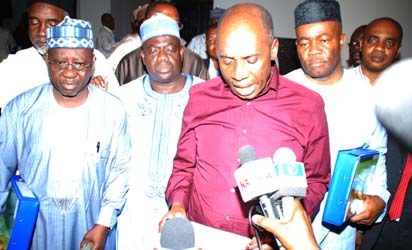 The expected showdown in the battle for the leadership of the NGF turned into an anti-climax, yesterday. At the end of a meeting that lasted for about four hours, the governors resolved to reschedule the elections to May just ahead of the end of the tenure of the incumbent chairman of the NGF, Governor Rotimi Amaechi of RiversState.

Yesterday’s decision of the NGF was the culmination of intrigues and power play that saw Amaechi in direct conflict with the assumed interests of President Goodluck Jonathan. President Jonathan’s close associates, it was learnt, were directly deployed in mobilizing support for Governor Ibrahim Shema of Katsina State who had been selected as the choice candidate of the Villa to replace Governor Amaechi who had been considered as hostile by the Villa.

Powers of the Presidency

At the Monday night’s meeting of the PDP Governors at the Villa, it was learnt that Governor Babangida Aliyu questioned the rationale for  setting up a PDP Governors Forum when it was the party that set up the NGFm in the first place.

He was allegedly shouted down by Governor Akpabio which resulted in a shouting match between the duo.

Normally reliable sources disclosed, last night, that ahead of the expected showdown, the powers of the Presidency at the highest levels in Aso Rock were directly deployed in the campaigns that saw the governors being  contacted individually. The governors were reportedly told that Gov. Amaechi had declared war against President Jonathan and the governors should not empower him.

In some cases, some governors were shown video  recordings where Amaechi was alleged to have  sworn to unseat  President Jonathan.

“Recordings of events where Amaechi said hostile things against the president were given to the governors and it was said that the president vowed that he would not leave without a struggle and that is what happened today,” a source privy to the development told Vanguard, last night.

It was learnt that a number of the governors who had backed Amaechi until yesterday developed cold feet in the face of the fierce determination and pressures from the presidency. Shema, who was the presidency’s choice to replace Amaechi, it was learnt, still did not have enough votes to carry the day, leaving the two camps to postpone the election till May.

Governor Amaechi who read a three-paragraph communiqué at the end of the meeting, yesterday evening said: “We the Governors of the 36 states of the Federal Republic of Nigeria at our third meeting of the year held today (yesterday) Monday, February 25, 2013 at the Rivers State Governor’s Lodge, Abuja, deliberated over a number of issues and resolved as follows:

“Members reviewed the affairs of the Forum in the past 21 months detailing activities, achievements and challenges experienced during the period.

“After exhaustive deliberation of the issues regarding filling vacant positions, the Forum resolved that election in this regard be postponed until May when the Chairman’s initial two-year tenure will expire.”

Yesterday’s meeting, which started at 4p.m. and ended 7.45p.m, was a follow-up to that of last Wednesday which ran into the early hours of Thursday and also ended in a deadlock.

Prior to the meeting of the NGF, 19 of the 22 PDP governors met in the Akwa Ibom Lodge in Abuja in the first formal meeting after the formation of the Forum of PDP Governors.

Besides the governors, two prominent PDP chieftains, Chief Tony Anenih and Prof. Jerry Gana, were present at the meeting where issues pertaining to the party and the adoption of a common position on the chairmanship of the NGF were reportedly adopted.

A source at the meeting disclosed that Governor Shema of Katsina was adopted as the putative PDP nominee for the chairmanship of the NGF.

Besides, as a way of showing the relevance of the new PDP Governors Forum, it was resolved that the new forum would champion the reconciliation of the party’s divided factions in the South-West.

Remarkably, Governor Akpabio, who briefed newsmen at the end of the afternoon meeting, said the new forum would liaise with the National Working Committee, NWC, of the party in repairing the party’s damaged fortunes in the South-West.

In a significant concession to his colleagues, Akpabio said the PDP Governors’ Forum would go along with the NWC’s decision recognizing the Mijinyawa Kugama-led executive of the party in AdamawaState which is loyal to Governor Murtala Nyako

The earlier decision by the NWC to dissolve the Kugama-led executive was a direct reason for the confrontation between the governors and the Presidency which led to the recent face-off.

Why I was elected —Akpabio

Briefing newsmen at the end of the meeting, Akpabio further disclosed that a committee led by Governor Shema of KatsinaState has been constituted to evaluate the situation in the South-West.

He said his emergence as chairman of the PDP Governors’ Forum at the Sunday night meeting with the president and senior officials of the party was a direct result of the dangers posed by the merger of the major opposition parties into the All Progressive Congress, APC.

“We are of the opinion that we should take steps to set up structures to meet the emerging challenge of APC. And part of the resolution is that we should have continued interaction of the party, the NWC, leadership of the Board of Trustees and to build a synergy with the Nigerian Governors’ Forum.

“We also looked into the issue of Adamawa State PDP and came to the conclusion that we should allow Governor Sule Lamido’s committee to do its work and to report immediately to the party, NWC and the Presidency.

”But in the meantime, we plead that the status quo should be allowed to remain. By the status quo we mean the Mijinjwa Committee. The executive in place prior to the dissolution of the state executive.”

He explained that the Shema committee would submit its report within two weeks.