WEEKS after the House of Representatives released the damning report of its investigations into the utilization of fuel subsidy by oil importers, expectations for quick government action on the report are increasingly mired in politics. The cabal is even fighting back!

It is now more than three weeks that the Farouk Lawan led ad-hoc committee on the utilization of fuel subsidy released its report to the House of Representatives. The release of the report had in the days following, fueled a nationwide frenzy for the prosecution of the marketers, thier political collaborators and merchants who were demonized for reportedly milking the nation of trillions of naira.

Inevitably, presidency officials had initially sought to be on the right side of public opinion with a pledge from senior presidency and Peoples Democratic Party, PDP officials joining the clamour in the demonization of the subsidy beneficiaries.

An indication that the government may not be in a hurry to deal with the alleged culprits is amplified by the cacophony of voices in which government officials are speaking.

The damaging report In its report submitted on April 18, the Lawan-led House probe committee submitted that while the sum of N245 billion was budgeted for subsidy in 2011, the government paid out N2.5871 trillion.

The report said that subsidy fund totaling N1.7 trillion was illegally paid to some government agencies and oil marketers. It identified the agencies as the Nigerian National Petroleum Corporation (NNPC) and the Petroleum Products Pricing Regulatory Agency (PPPRA) and Department of Petroleum Resources (DPR).

The report also listed the Office of the Accountant- General of the Federation and 72 oil marketing firms as authorising and receiving the illegal payments, respectively.

Given the bitterness of Nigerians over the way and manner that the administration handled the removal of subsidy from petrol at the beginning of the year it was understandable that many Nigerians would call for the prosecution of those indicted by the report.

The figure of N2.587.087trillion is based on the CBN figure of N844.944b paid to NNPC in addition to another figure of N847.942billion reflected as withdrawals by NNPC from the Excess Crude Naira Account as well as the sum of N894.201billion paid as subsidy to marketers,” the House report disclosed.

Jonathan’s pledge Following the nationwide clamour on the issue, President Jonathan on April 22 through his Special Adviser on Media and Publicity, Dr. Reuben Abati, said he would act in the best interest of Nigerians and ensure that any person found wanting is prosecuted irrespective of the person’s standing in the society.

SNG ultimatum With all those indicted walking free so far, the Save Nigeria Group (SNG) penultimate Monday gave the government a two week ultimatum ending on May 13, to prosecute the culprit or face mass protests.

Convener, SNG, Pastor Tunde Bakare, said in Lagos that considering the low confidence Nigerians have in the anti-graft agencies in dealing with corruption in the country, the group would want a private prosecutor to deal with the issue. Bakare spoke at a press conference organised by the group on the fuel subsidy scam with a theme “Kleptocracy Unlimited.”

FG officials speak in diverse tongues Since the promise was made, no culprit has been charged to court. The only action taken to date is the sacking of the auditing firms of Akintola Williams and Company and Adekanola and Company, by the Minister of Finance and the Coordinating Minister of the Economy, Dr. Ngozi Okonjo-Iweala. The two firms reportedly certified the documents and claims of the marketers before payments were made.

With those indicted walking free, actions of government agencies and different positions taking by government officials indicate that little or no progress may be made on the matter in terms of refund of the money and prosecution.

For a start, some members of the House of Representatives during the presentation of the report absolved the then Accountant General who allegedly made the controversial payments of any wrong-doing.

The Central Bank of Nigeria (CBN) has also picked holes in the report and washed its hands of most of the allegations leveled against it by the panel. 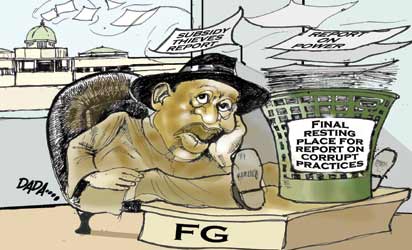 In a four-page letter dated April 27, 2012 with reference number: BPS/DIR/GEN/DOL/01/028 and signed by its Deputy Governor (Operations), Mr Tunde Lemo, addressed to Lawan, the CBN claimed that  there was no time CBN paid any money to the NNPC in respect of subsidy claim.

The apex bank also faulted the committee’s report which accused the CBN of creating an avenue for falsification of records of quantity of petroleum products discharged through its forex policy.

Relatedly, Political Adviser to the President, Alhaji Ali Gullack, said on Wednesday that the probe lacked credibility because “it looks like the probe is targeted at some individuals.”

Gullack’s comments are in sharp contrast to those of the Presidential Adviser on National Assembly Matters, Senator Joy Emordi, who like Abati, said President Jonathan was on the same page with the lawmakers.

According to Gullack, the manner of invitation of persons, who appeared before the panel fuels beliefs the probe was meant to advance the political ambition of some individuals.

“Why did they not invite Rilwanu Lukman? He was the Minister of Petroleum Resources during the period of the probe. Where is Mohammed Barkindo, who was the Group Managing Director, NNPC at the time? Where are the other key actors, who were at the vanguard f the subsidy regime?

The House of Representatives must probe these individuals before we can truly say they are doing the right thing, otherwise the report will lack credibility,” he said.

Gullack’s comment was against the backdrop of allegations that the President was sitting on the report because implementing it would hurt some loyalists and financiers of the ruling PDP.

Saraki: The cabal fights back Penultimate Thursday, the Attorney General of the Federation and Minister of Justice, Mohammed Bello Adoke (SAN) in his first response to the development rattled the activists when he disclosed that the President had not okayed any culprit for trial because there was “need to ensure that thorough investigations are carried out by relevant law enforcement agencies.”

While asserting that the report on the investigations carried out by the House had not been transmitted to the executive, the chief law officer of the federation did not mince words in saying that conclusive evidence on the guilt of the subsidiary beneficiaries had not been produced.

The dithering procrastination by the executive in acting on the report has inevitably led to claims of a fight back by the alleged beneficiaries of the subsidy scam.

In the most notable case of what some allege as a vicious fight back by the subsidiary cabal is the case that has been brought up against Senator Bukola Saraki.

Saraki it would be recalled had first blown the whistle on the misuse of the subsidy regime through a motion he brought before the senate last October.

Remarkably, that motion was only brought to the senate floor after some extended delay which no one was able to explain.

In the motion, Senator Saraki had urged the senate to investigate how the N240 billion appropriated for fuel subsidy in the 2011 budget had as at September exceeded that provision and was heading towards N1.5 billion.

In the motion which was supported by at least twelve other senators, Senator Saraki representing Kwara Central Senatorial district had noted thus: “notes that the N20bn monthly allocation, N11.2bn was allocated to Domestic Fuel Subsidy (NNPC) and N8.8bn for Domestic Fuel Supply (Market) as stated in the Appropriation Act 2011.”

”Although N20bn was set aside for subsidy on a monthly basis in the Appropriation Act 2011, in August 2011 the total figure expended was N165bn of which NNPC was N88bn and Independent Marketers N7.7bn.”

“observes that although N240bn was budgeted for the entire year, so far as at the end of August 2011 N931bn has been spent. This is a variance ofN771bn or 700 per cent above budget in the first three months of the year both NNPC and the Independent Marketers did not exceed N62bn monthly, but within the last three months figures have ranged between N150bn and N186bn.”

The senate in upholding the Saraki motion mandated its committee on downstream petroleum to uncover the issues raised in the motion by Saraki.

Remarkably, while the Senate Committee headed by Senator Magnus Abe was still deliberating on the issue, the House of Representatives last January empowered the Lawan committee on a similar assignment. There is a deep suspicion in some quarters that the subsidy beneficiaries could be fighting back against Saraki who was the first to make a public disclosure of what was going on in the sector.

So, when the Police penultimate bared its fangs on Saraki’s alleged complicity in a bank loan gone sour, it was not difficult for Saraki’s sympathizers to make a connection between the issue and the senator’s role in the subsidy probe.

But then, the matter of Saraki’s quizzing is beside the issue of the allegations raised against him by the police on the alleged illegal write off of a substantial part of a loan given a company, Joy Petroleum plc.

The loan was written off reportedly at the behest of a former top shot of the legacy Intercontinental Bank who remarkably, at one time an employee of Kwara State during Saraki’s time as governor of the state.

Irrespective of the substance of the case, critics point to the fact that the authorities had kept mute on the allegations against the senator until after the clamour for the prosecution of the subsidy beneficiaries.

So, given how past reports had been swept under the carpet, reported attempts by some powerful forces in the polity to stop the report from being published, and moves to divide the Reps with the goal of getting of Speaker Aminu Tambuwal removed, as well as varying positions of government officials, it is to be seen if the fuel subsidy report would be treated differently.