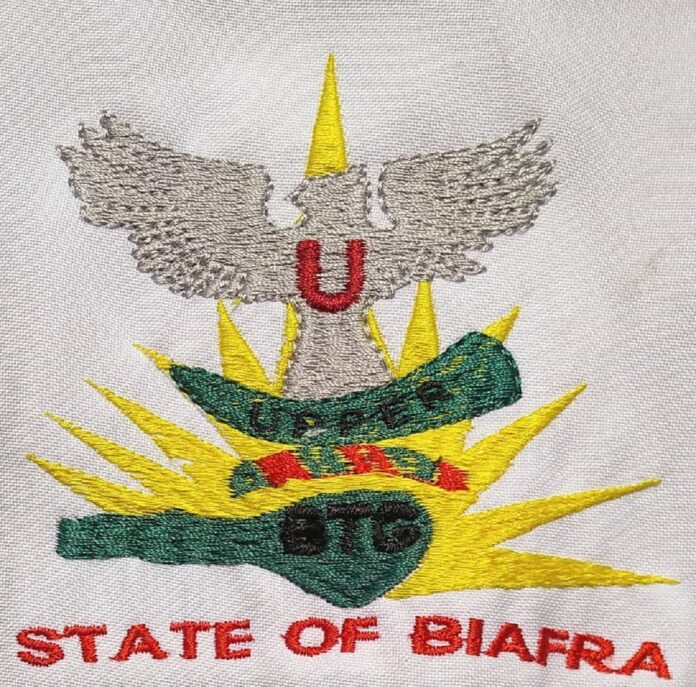 The Biafran Transitional Government [BTG] is pleased to announce the official inauguration of sixty  [60] Provisional Representatives of both Upper and Lower Chambers of the Biafran Transitional Parliament [BTP]. The inauguration ceremony held at the Biafran National Guard [BNG] Headquarters in Nsukka Province featured the election and swearing-in of Barr. Mark Roman [Degema Province] and Mrs. Alabrah Stephanie [Sagbama Province] as Head and Deputy Head of the Upper chamber BTP respectively.

In his address, Head of the Upper chamber pledged the support and loyalty of the transitional parliament to the people of Biafra. He reassured BNG that whatever that is necessary to accelerate the total restoration of Biafra sovereignty shall be provided without hesitation. Also, he endorsed the planned disruption of the 2021 governorship poll in defunct Anambra state as announced by BNG citing the continued detention of innocent and defenceless Biafrans held for over fifteen [15] years in Awka and Onitsha Prisons by the Nigerian State.

Continuing, he reiterated that the support of the BTP on the disruption of the planned poll in defunct Anambra state is unwavering. He queried why terrorists in northern-Nigeria are granted amnesty and tagged ‘repentant’ while innocent Biafrans are incarcerated for decades because they seek their right to self-determination recognized, reaffirmed and solemnly proclaimed by international laws and instruments.

Barr. Mark Roman berated the occupying Nigeria Senators and Representatives especially those of Biafran stock for their docility and conspiratorial silence in the face of subjugation and marginalization of Biafrans by the Fulani -controlled Nigeria state. He warned those politicians to quit living in denial of the troubled state of Nigeria for the days of reckoning is fast approaching as their claim that Nigeria is united is an illusion.

Meanwhile, Mrs. Okiemute Amughghoro described as evil the collaboration of the  defunct South-East governors and socio-political group ‘Ohaneze-Ndigbo’ on the proscription of freedom fighters as terrorists while genuine terrorists engaging in the kidnapping of teenage boys and girls in northern-Nigeria are paid ransoms and pleaded upon. She demanded for the immediate and unconditional release of the following Biafrans incarcerated in the Onitsha and Awka prisons; UCHE IDIKAIGBO, MICHAEL OKEZIE, UCHENNA NICHOLAS, PETER IGBOKWE, IKECHUKWU AGHARA, MRS. ONYEKACHI ORJI, MISS OKWUDIRI BASSEY, CHIMA ASOR and CHINWEIKE IRONDI.

The Principal of Lower Chamber BTP charged for full compensation of these Biafran prisoners of conscience, calling their imprisonment illegal and flagrant abuse of their fundamental freedom and human rights. Mrs. Okiemute emphasized that the right to self-determination is the principle that allows a people to choose its own political status and to determine its own form of economic, cultural and social development.

The right to self-determination of peoples is recognized in many international and regional instruments which includes the Declaration of Principles of International Law Concerning Friendly Relations and Co-operation Among States adopted by the UN General Assembly in 1970; the Helsinki Final Act adopted by the Conference on Security and Co-operation in Europe (CSCE) in 1975; the African Charter of Human and Peoples’ Rights of 1981; the CSCE Charter of Paris for a New Europe adopted in 1990; and the Vienna Declaration and Programme of Action of 1993. It has been affirmed by the International Court of Justice in the Namibia, Western Sahara and East Timor. Furthermore, the scope and content of the right to self-determination has been elaborated upon by the UN Human Rights Committee, and the Committee on the Elimination of Racial Discrimination, and numerous international jurists.

In conclusion, Amb. Okoye Adaeze representing Awka Province [Upper Chamber] moved a motion for the appointment of another leader in BNG as the position has remained vacant since the expulsion of General Innocent Orji from its fold. The motion was seconded by Comrade Timothy Igbife of Brass Province [Lower chamber], thus the transitional parliament requested the directorate of BNG to forward to the chambers the resumes of responsible and capable personnels specifically the likes of former BNG leader in his prime.

The following are the names of the sixty [60] provisional representatives and their provinces: