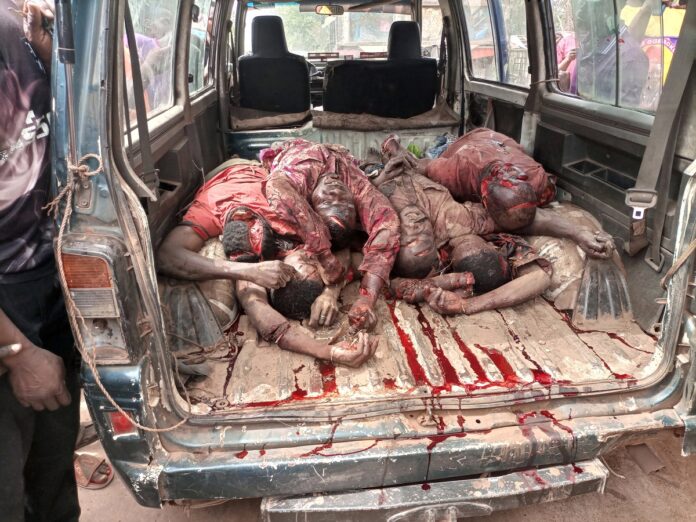 It was a gore sight to behold on Tuesday morning after Fulani herdsmen invaded Obeagu Community in Ishielu local government area of Ebonyi State and killed 16 people who were between the ages of 18 and 56 on Monday night.

Our correspondent, who visited the scene of the incident, report that about 10 motorcycles and a vehicle whose owners were killed was burnt down.

There were uncontrollable tears from the members of the community whose relations were involved.

Chairman of the Council, Mr Henry Eze and Ebonyi State Commissioner for Business Development, Mr Stephen Odo led security agents to the scene.
Odo, hails from Nkalaha, a neighbouring community that where also attacked and five people killed.
Among those that were killed are Rev. Peculiar Njoku of Methodist Church and Teacher with Model Comprehensive Secondary school, Obeagu, Friday Ede.

Speaking with our correspondent, one of the eyewitnesses who escaped the onslaught, Ngozi Odoabuchi, described the incident as horrible and could not wish it on her enemy.

According to her, “I went to Ishielu Local Government headquarters where I am working and after close of work, I took motorcycle popularly known as ‘Okada’ from Nkalagu to my community Obeagu. It was around 4:30pm. The Okada man is from my community, so he took me and one other person, a lady. While were going home, we got to the Egedegede Junction, everywhere was calm, people where moving around.

“So, we passed the junction and were heading to the village. Between the village and the junction was about 10 to 15 kilometers, so because we were not suspecting any danger, halfway to the community, we sighted about seven men, dressed on black clothes, three were going inside the bush while four were by the roadsides.

“On getting to the point, they stopped us and took us inside the bush. Inside the bush where about 10 to 15 others. Immediately, they started beating us black and blue. While they were beating two of us who were women, they stabbed  the driver with a dagger and slaughtered him in our presence. After killing him they started matching on our body.

“So, every motorcycle that comes, they will stop it, kill every male and burn the motorcycle.”

Mrs Odoabuchi, who said that she prayed seriously for God’s intervention to save them, noted that while she was lying down with another girl, they left pursuing another people, immediately they ran inside the bush and hid and the darkness of the night covered them until this morning.

Collaborating her story, Amuche Uga, another eyewitness who survived the onslaught, said that she was coming home from Onitsha to see her parents when she got into the incident but thanked God that she survived.

She said, “the incident was too horrific and gory. All those who carried the attack were Fulanis. They told us that they were Fulani militias. They also told us that we should go and tell Nnamdi Kanu that they can enter any Community in Igboland and carry an attack and nothing will happen.”

Another person who gave his name as Okechukwu Ebeh, alleged that the assailants were brought to the community on Monday afternoon in an unmarked five Hilus Vans.

They first attacked a young man who was returning home with his mother and wife but they couldn’t succeed.

“We he came to the village, after telling his story,  our people immediately started calling people who were in Nkalagu and Eha-Amufu and other neighbouring communities to remain there until the issue was addressed. Unfortunately, those who didn’t get the information were mostly the victims. Others killed were people passing through the community from other states at Egedegede Junction.”

He said that among those they killed at the Junction after the carnage along Obeagu road was a priest of Methodist Church in Nkalaha, a neighbouring community while he was returning home. Three residents of Umuhali, two residents of Amazu, and three residents of Eha-Amufu in Enugu State who were passing through the road that traverse Nkalagu – Obeagu, Eha-Amufu -Ikem and Ubolafor road were also killed. Two others, who hail from Anambra state but were residing at Nigercem were also killed.

Our correspondent counted 16 corpses that were scattered in various locations where they were killed.

Speaking on the carnage, Ishielu Council chairman, Eze described the incident as gruesome and called on the security agencies to fish out the killers.

“I was dumbfounded seeing my people, young boys killed in cold blood for no reason. It is callous and unacceptable in a modern society. No matter what the problem was, killing young men in that manner was unacceptable.

“I call on the security agencies to fish out those behind the killing.”

A community leader, who gave his name as Oji Osondu said, that the offence of his community was asking the herdsmen to leave their community.

“Around two weeks ago, our community asked them to leave their Community. For years now we don’t cultivate our farms again because after cultivating they will carry their cows into farms and destroy everything. When you approach them they will tell you that it was not done by their own cows. So that was why this year, our people told them to leave our community so that we can return to our farms.”

He added, “two years ago, our cooperative society cultivated 1000 hectares of rice but everything was damaged by Fulani herdsmen with their cows and nothing happened. We complained to the government of Ebonyi State and all the security agencies but nothing was done. They didn’t pay compensation for the entire farm they destroyed till today.”

He lamented that the assailants, had after killing 11 young boys along road leading to the community, they came out on the Federal Road that passed the community to other communities, and the neighbouring Enugu state.
“Along the road they killed anybody they see, and that was when they killed people from other communities – Nkalaha, Amazu, Umuhali and Eha-Amufu respectively who were returning home from their working places that Monday evening.”
Meanwhile, the Ebonyi State Police Command has confirmed the incident but could not confirm the casualty figure.

The Police Public Relations Officer, DSP Loveth Odah, who spoke with our correspondent in Ebonyi, “The Commissioner of Police delegated a team of policemen for on the spot assessment because of peace talks going on in the town.”

“We are still waiting for our men to come back to tell us their findings. I am already preparing a press release on the incident but their report too will assist us in giving you detail information about it.”