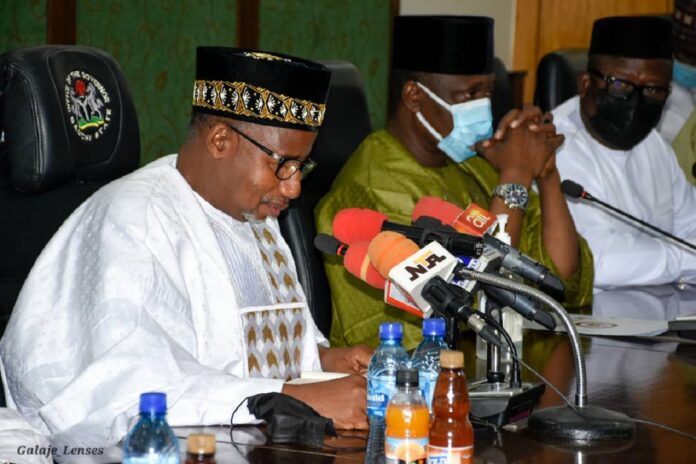 Bauchi State Governor Senator Bala Mohammed Abdulkadir has expressed his support to the agitation for financial autonomy  to the states Housee of Assemblies and the Judiciary .

Governor Bala expressed his support in Bauchi over the weekend  when he received members of the Conference of Speakers of State Legislatures in Bauchi,

He said that Bauchi State is proud to host the Speakers whom he described as representatives of the people and the heartbeat of the people that anybody at any level of leadership cannot take for granted.

Bala  said that, “Your Chairman has made me very proud. With the spate of perception, insecurity, mistrust  in the Country, definitely your coming here is instructive and is pointing to the fact that Nigeria is indivisible, Nigeria has come to stay as a nation. It has keep hope at the end of the tunnel for Nigerians and few of us who are doubting Thomases.”.

He said that the Conference of Speakers is a forum to reckon with in Nigeria’s political architecture explained that he is inexorably connected with the arts of the legislative practices and sensibilities.

He extolled the role and contributions of the lawmakers to the growth of the State, saying that despite their party differences, they are united and looked toward people who elected them and the State which is their collective constituency, hence the unity and support he has been enjoying from them which is resulting delivery of dividends of democracy.

The Governor reaffirmed his support to financial autonomy to State Legislature, saying he found the agitation for the financial autonomy for the legislature and the judiciary as very suitable but urge them to look at the order side of the coin because it is coming with a lot of challenges.

The Chairman who is also the Speaker of the Bauchi State House of Assembly narrated how the Governor rendered all the needed support and cooperation to the legislature, saying that the Governor who is a former parliamentarian so much believed in the sanctity of the legislative arm.

Suleiman also noted that Bauchi State under the stewardship of Governor Bala Mohammad is witnessing unprecedented transformation in all aspects of human endeavour.

He said that, “In less than two years in office, he has embarked on various people-oriented projects across the State; from urban renewal to rural transformation, water expansion project to construction and renovation and equipping of schools and hospitals, construction of housing estates in six Emirates of the State to reconstruction of the Government House, to mention but few”.

The Speaker added that, “This feat is the product of the harmonious working relationship existing between the legislative and executive arms despite our differences. Though APC leads the legislative arm while PDP leads the Executive Arm, you don’t hear any rancour in the State Assembly.”.

While thanking his colleagues for electing him to lead the Conference, the Chairman narrated how his colleagues entrusted on him the leadership of the Conference, explaining that when he was first nominated, he was skeptical in accepting the challenge but the Governor supported and encouraged him to answer the clarion call.

On the purpose of the general meeting which will hold today, Saturday, Abubakar Suleiman said that the meeting will deliberate on issues of national interest, proffer solutions and make recommendations where necessary.

He thanked the Governor for graciously hosting the Speakers in the State, saying that all the Speakers are happy with the hospitality accorded them.