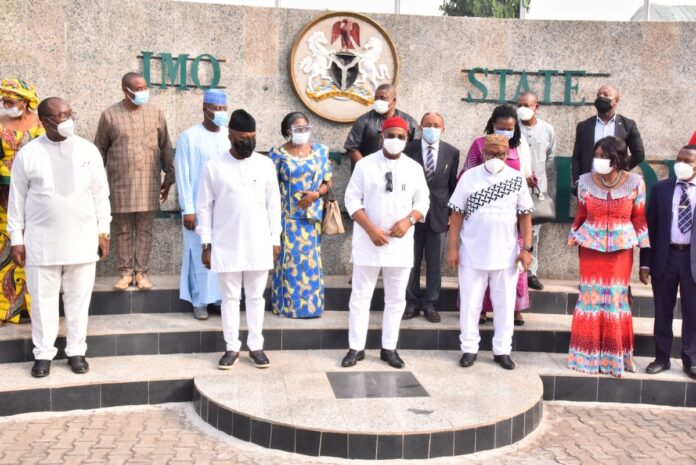 Governor of Imo State, Senator Hope Uzodimma has assured the  Governing Council and management of the Federal University of Technology, Owerri of Government support in carrying out their routine duties without molestation.

The Governor gave the assurance when the Council led by the Pro- Chancellor and Chairman,  Prof John Omimi Offem came on a solidarity visit to the Governor at the Government House Owerri, Imo State, Thursday.

The Governor said he recognizes the  integrity and respect of the Chairman and members of the Council and described them as good stakeholders appointed to the positions by the All Progressive Congress (APC) controlled Government at the Federal level.

He thanked the Council for maintaining a cordial relationship with the school, the students, the FUTO host Community and Imo State in general, describing the institution’s relationship with Imo State government as that of landlord and tenant that will never allow any of the parties to suffer or be inconvenienced.

Governor Uzodimma assured the management of the University that he will do his best to enable them do their job without disturbances, saying that on assumption of duty as the Governor of Imo State he took the issue of land encroachment head-long to resolve the problem. “That is why there is relative peace between the University and the Community in the area.”

He maintained that government will continue to create an enabling environment that will encourage them to do their business, noting that though the school belongs to the Federal Government,  the major beneficiaries are the people of Imo State in particular and the South East in general. “So it is a partnership that the State cannot afford to fail,” he said.

The Governor however warned that whatever anybody does in the University peace and harmonious co-existence must be uppermost in their calculation “because there is already enough tension in the South East arising from the activities of IPOB, and herdsmen.”

He wished the Council well in their endeavour and promised to always be with them.

Earlier,  Prof Offem had congratulated the Governor on his assumption of office and requested that he assists the University in erecting a perimeter fence around the school to protect the institution from external encroachment.

Most importantly, the Pro-Chancellor commended the governor on behalf of the University Community on the on-going repair of Naze-Nekede-Ihiagwa-Obinze road, leading to FUTO, saying that “the fixing of the collapse bridge will save the University and its environs from various forms of crime and criminality such as kidnapping, armed robbery, rape and all sorts of immorality.”

He added that the bridge will improve access of people to their homes, their houses, hostels and to the campus and urged the Governor to continue with the good work he is doing as the people will surely be happy with him at the end of the day.

He also pledged the unalloyed support of the University and her Management to the Shared Prosperity Administration of Governor Uzodimma.