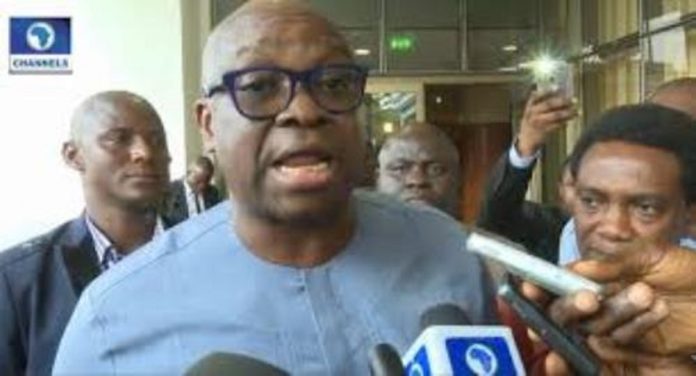 Oyo State Governor,  Seyi Makinde has been told to stop sucking like a baby and acting like he is over and above everyone in the People’s Democratic Party (PDP), while disrespecting those who stayed in the party between 2007 and 2017, when he was wandering from one political party to the other.

Lere Olayinka,  aide to the former Governor of Ekiti State,  Ayo Fayose,  who was reacting to a statement on Thursday, by Makinde,  warning the party’s National Legal Adviser, Emmanuel Enoidem, said “it is strange that someone who got the PDP ticket in 2018 through the benevolence of some leaders of the party and members of the National Working Committee (NWC), can now be issuing warning to the National Legal Adviser for simply doing his job.”

Olayinka,  who said Governor Makinde, should stop parading himself as the Premier of the South-West, added that “Those of us who stayed in the PDP to defend and hold it together when he (Makinde) was wandering from one party to the other, deserve some level of respect from him because we are his seniors in this party.”

“On this one,  I speak for myself and not as Media Aide to Fayose or Spokesperson of the South-West PDP and I wish to tell Governor Makinde that he is not more a committed member of PDP than me.

“The governor needs to be told that the party is bigger than him and he can’t be ordering NWC members around as if they are his aides. The governor should also be mindful that not everyone can be bought.

“The Legal Adviser and other National Officers as well as leaders of the party that Makinde is now disrespecting were there to help him when he returned to the party in November 2017 after he had contested the governorship election as candidate of the Social Democratic Party (SDP).

“In 2015, Governor Makinde was prevailed upon to accept senatorial ticket and stay in the PDP,  but he refused. He instead decamped to SDP. So when did he become more of a loyal member of PDP than people like us?  Did this same Makinde not take PDP to court in 2014 over the governorship primary election, using one Demola Adelowo that he left in the party to continue with the case while he moved to SDP?

“When he could not get the PDP Senatorial ticket in 2007, did he not go to court against PDP and Senator Kamoru Adedibu to court and was the case not in court till 2011 that he returned to the party?

“Isn’t it funny that this same Makinde, who took PDP to court twice is now the one issuing warning to the National Legal Adviser of the party,  for simply acting to protect the law and the party? May be he wants to come and take over the NWC and run it along with Oyo State.

“On venue of the Zonal Congress, it is clear that Governor Makinde has perfected plans to unleash his thugs led by Lamidi Mukaila (aka Auxiliary) on those perceived as opposing him and I am sure the party will not endanger the lives of its members by holding the congress in Ibadan.

“That Governor Makinde is oblivious of all these is understandable because he has never stayed in the PDP long enough to understand the workings of the party. That’s why it is so convenient for him to place the same people who worked against PDP in 2019 over and above those who worked for the party.”

While admonishing the governor to concentrate on governance and stop fighting imaginary political enemies,  Olayinka said it was important for Governor Makinde to quench the fire in his bedroom before running around with fire extinguisher, seeking to quench fire in the gatehouse of other people.