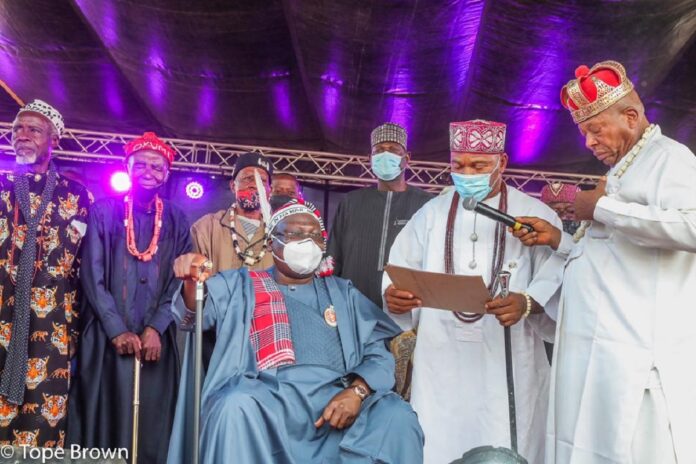 Abia State Commissioner of Police, Mrs. Janet Agbede, has ordered over the arrest and detention of the former chairman of Abia state council of traditional rulers, Eze John Akaliro, another traditional ruler, Eze Sunday Ekebuisi and seven others over the recent clash between Fulani herdsmen and some farmers at Ozuitem community in Bende Local Government Area.

A youth leader in the area told 247ureports.com that in January 2021, some group of Fulani herdsmen had taken their cows to farmlands in Ozuitem and environs and destroyed farmlands and cash crops.

Worried by the situation, the affected farmers through their representatives reported the matter to the chairman of Bende LGA, who contacted the Divisional Police Officer, (DPO) of Bende Police Division to investigate the matter.

Few weeks after the farmers lodged report, another incident occurred Onuiyagha where yet to be identified persons had a fracas with the herdsmen and some cows were killed while cash crops were also destroyed.

The DPO of Bende Division invited those who had earlier reported the destruction of their farmlands by Fulani herdsmen to Umuahia, including the two monarchs, leaders of some communities and the affected farmers, that the Commissioner of Police wants to broker peace between them.

On arriving the state Police Command headquarters, Umuahia; the Commissioner of Police ordered the arrest and detention of Eze Akaliro, Eze Ekebuisi and seven others, accusing them of being behind the killings of cows at Onuiyagha.

Chief Kalu Mba Uka, a community leader in Bende , condemned the detention of the monarchs and described the development as intimidation , injustice and desecration  of the traditional institution as the monarchs didn’t commit any offence.

“It is unfortunate that our people including a first class traditional ruler are being unjustly detained at state command, Umuahia for no other reason than cows which have been destroying their farms were killed by unknown persons.

“It is only in this part of the country that a traditional ruler of Eze Akaliro’s standing will be detained by a CP because unknown persons killed some cows. Could a first class Emir or Oba be detained because of cows?” the group said.

Uka lamented that Bende people had been suffering over the activities of Fulani herdsmen in the area and urged the state government to order the herdsmen out of their farmlands and bushes.

Efforts to get the reaction of the Abia State Commissioner of Police, Mrs Janet Agbede was unsuccessful as she did not respond to calls made to her telephone.