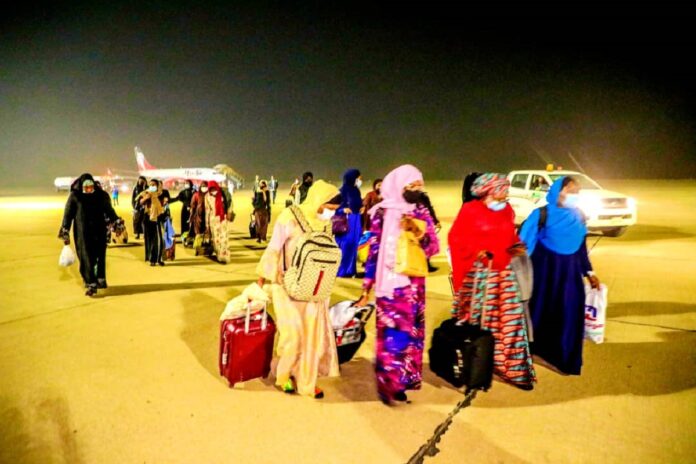 A total number of forty seven (47) indigenous Kano female trained Medical Doctors came back from Sudan as they graduated, after clearing hitches they faced due to incomplete fees for their studies inherited from past administration in the state.

They left for Sudan since 2014, when the past administration, before governor Abdullahi Umar Ganduje’s regime came to being, sponsored their MBBS programme in the Al-Ahfad, Al-Razi and Undurman Universities.

The Executive Chairman of the Kano State Public  Complaints and Anti-Corruption Commission, Barrister Muhuyi Magaji Rimingado, alongside the Commissioner for Higher Education, Dr Mariya Mahmud Bunkure, Senior Special Assistant to the Governor on Higher Education, Usaini Jarma and representative of the State Scholarship Board, went to Sudan few days earlier, to see to the payment of outstanding bills hanging on the graduates before they were cleared by those universities.

They arrived Kano, through Malam Aminu Kano International (MAKIA) from Sudan enroute Abuja, around 11pm last night, Friday, accompanied by Kano state delegates under the leadership of Barrister Muhuyi Magaji Rimingado, whose faces were full of joy and feeling of fulfilment.

From the airport they were conveyed to State Anti-Graft’s Kano Anti-Corruption Institute, Gorondutse in Kano metropolis. Where they met their parents and were officially handed over to their parents by the state government.

During the handing over ceremony Barrister Rimingado assured that, the state government is determined and ready to unearth any alleged sharp practices associated with foreign scholarship programmes emanated from the past administration.

“His Excellency, Dr Abdullahi Umar Ganduje vows to purify the process of paying any outstanding fees left behind by the past administration, so that tax payers money will not be leaking again in the name of foreign Scholarship. That is why the governor directed our office to come into the exercise,” Rimingado said.

“Parents should know that, out of the total sum of over $2 million meant for this particular exercise, Dr Abdullahi Umar Ganduje’s administration paid over half of the money. That is over $1 million was paid,” he reveals.

According to the State Anti-Corruption Commission Executive Chairman, his agency would continue investigating what transpired in the whole process. Vowed that anyone found wanting “…will face the music. No stone will be left unturned,” he assured.

He further hinted that, all the students behaved very well while in Sudan, explaining further that, “We didn’t get any disturbing information about them. They represented our dear state and the country in general very well. They were good Ambassadors in all fronts.”

In her brief remarks the Commissioner for Higher Education Dr Bunkure, acknowledged the administration’s effort in helping the trained Medical Doctors finish their studies successfully.

She said “This administration of our able and hardworking governor Dr Abdullahi Umar Ganduje is always ready for human development. He believes in developing our youth. He wants make sure that women are equally educated, as part of the stakeholders for the overall development of our dear state.”

Chairman of the Patents Forum of the returning Medical Doctors Ahmad Baffa Usman, thanked governor Ganduje for fulfilling the promise he made for the students, who were left unattended in Sudan.

Usman said “We are very grateful to His Excellency, the able governor of Kano state Dr Abdullahi Umar Ganduje OFR, for his deep concern about us and our and his children. He proved to be a very caring father to all his children.”

After commending governor’s timely intervention, he also praised, on behalf of all the parents, the Executive Chairman of the the state Anti-Corruption Agency, Barrister Rimingado, “We are also very grateful to the Executive Chairman of the State Anti-Corruption Commission, Barrister Muhuyi Magaji Rimingado, for his untiring efforts in making sure that the outstanding payments for our children were effected in the most transparent manner.”

“We equally thank the State Commissioner for Higher Education, and all other individuals and bodies who did one thing or the other in seeing that our children are back safely in good health,” he said.

Dr Fauziyya Gwadabe, who spoke on behalf of the Medical Doctors, after thanking the governor for being caring, she acknowledged that, “We found a good and caring father in Baba Dr Abdullahi Umar Ganduje. We are very grateful. Only Allah will reward him. Bravo Baba Bravo.”

Because of insufficient funds left by the past administration, the young and vibrant Medical Doctors were not able to graduate, till when the advent of Dr Ganduje as the governor in the state.

Over $1 million was given by Ganduje administration, as hinted earlier, before they (graduates) finally complete their programmes and being released by their various universities. Because of the hitches they faced as a result of paucity of funds created earlier, none of them was able to come back home, but spent those years in Sudan, instead.