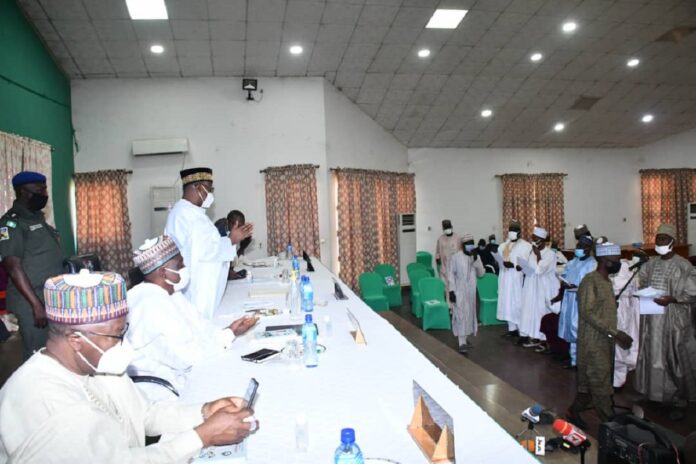 Governor Bala Abdulkadir Mohammed of Bauchi state has on Thursday sworn in two newly appointed Special Advisers and three Permanent Members of the State Civil Service Commission and that of the State Assembly.

The governor also sworn in Retired Commissioner of Police, Hamisu Makama, Alhassan Musa of the Chambers of Commerce and Abdullahi Maigari of Police Community Relations Committee as additional members into the panel of inquiry on abuses of human rights in Bauchi state.

At the swearing in ceremony held at the Banquet Hall, Government House, Bauchi, Governor Bala Mohammed tasked the appointed Special Adviser on Poverty Alleviation to come up with new ideas that will assist in minimizing the level of poverty in the state.

The governor assured that, in 2021, his administration will come up with direct assistance to individuals in addition to the ongoing various small and medium enterprises support for self reliant.

“It is very gladning today to swear in 8 persons eligible and competent people from Bauchi into the various positions of responsibility.”

“For poverty alleviation, you know we have to do so much in 2021, because there are so many people in the villages, towns that required some assistance from government.”

“I have told people of Bauchi that we will not just be building roads, renovating hospitals and schools and doing agriculture . We must combine that with recognition that is in poverty alleviation . We will do alot to people who looked at the government for support and assistance.”

On rural development, Governor Bala Mohammed called on the sworn in Special Adviser to join hands with critical stakeholders to enable the state government achieved the desired objectives in the sector.

“For Civil Service Commission, you have been doing well under the leadership of Mudi Abdullahi, but we will repositioning it to address the challenges facing the sector.”

The governor reiterated the commitment of his administration to work with the Civil Service Commission in 2021 to tackle inefficiently and ineffectiveness in the system through training and retraining of workers as well as employ new ones.

Governor Bala Mohammed therefore congratulated the appointees and urged them to work towards ensuring the rapid development of the state.