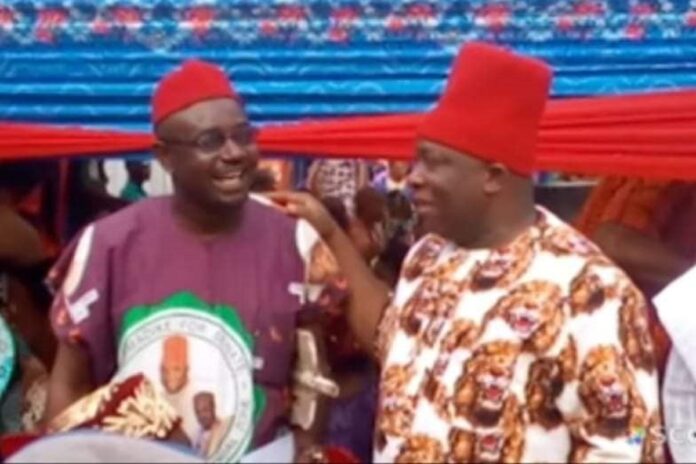 Prince Udodeme reportedly emerged victorious in a peaceful election conducted in Awka, paving the way for him to take over the mantle of leadership of Ohaneze Ndigbo in the state from Chief Damian Okeke-Ogene who previously held the position.

Udodeme, in his acceptance speech, emphasized the need for the entrenchment of Ohaneze Ndigbo at grassroots level, while vowing to use his new office to always advance the interest of Ndigbo.

In a congratulatory message, Umeh known as a dogged fighter for the cause of Ndigbo, described Udodeme’s emergence as a welcome development, noting that it’s a well deserved elevation.

His words: “On behalf of my Family and Campaign Organization, I heartily congratulate my indefatigable Director General, Prince Emeka Udodeme on his unanimous Election as the Chairman of Ohanaeze Ndigbo, Anambra State Chapter.

“Prince Udodeme is a very proper and right person for this Office, having served his Town Oraukwu as its President General as well as Chairman of the President Generals of Anambra Central Senatorial District. A grassroots mobilizer and a patriotic Igboman, Prince Udodeme will bring in his rich experience in the discharge of his duties.

“I am happy that Anambra State is blessed with this hardworking man with exemplary Character as Ohanaeze Chairman at this time.

“My Family shall continue to remember him in our Prayers as he assumes this Office of great Trust for Ndigbo!”