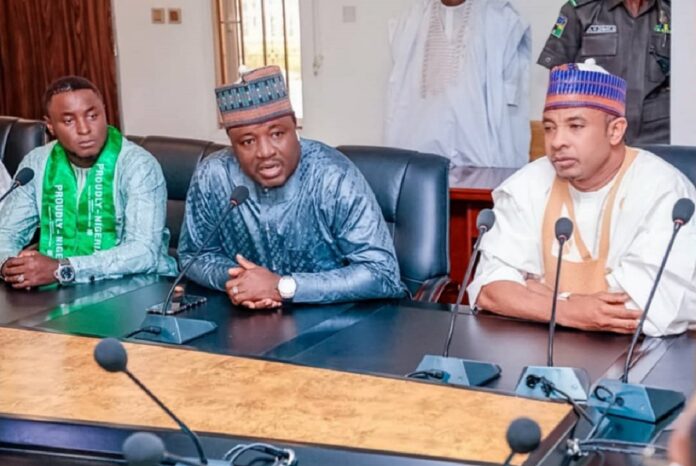 The Arewa Youth Consultative Forum (AYCF) has called on the governor of Lagos, Mr. Babajide Sanwo-Olu, to call his Commissioner for Waterfront, Kabir Ahmed, to order.

The group accused Ahmed, a northerner in the cabinet, of hijacking the traditional institution of the Hausa community in Lagos and thus usurping the roles of the ministry of local government and chieftaincy affairs.

The group also said the silence of the state government to the commissioner’s recent actions and interference in what is strictly the roles of the Arewa Council of Chiefs gives the impression that he is acting a script given him by the government.

Read the full statement below:

MEDIA  STATEMENT BY THE AREWA YOUTH CONSULTATIVE FORUM(AYCF) ON THE SUSPICIOUS GANG-UP DESIGNED TO SPLIT THE  AREWA COMMUNITY IN LAGOS, UNDER THE WATCH OF THE STATE GOVERNMENT

Our attention has been drawn to the subtle attempt to deliberately create division amongst the Arewa Community in Lagos, through the backdoor, using the office of the controversial Kabiru Ahmed, the half-forgotten  Waterfront Commissioner for Lagos State.

Pursuant to this dangerous move against the unity and brotherhood that has held the Arewa Community together for decades, we would like to state as follows:

1. The AYCF condemns in the strongest terms this conspiracy to create bad blood and destabilize the Arewa Community by creating a wrong impression about the Arewa Council of Chiefs’ established succession process.

3. We are worried that the Arewa Community has been asking questions about why the Lagos State Government has allowed a Waterfront Commissioner to dominate or hijack what should ordinarily be the role of a Commissioner for Local Government and Chieftaincy Affairs. It begs the question whether the Lagos State Government has an organized administrative structure or not. In a modern world governed by strategic communication, it is ridiculous that a Waterfront Commissioner would have the temerity to interfere with a matter strictly concerning the monarchy.

4. We would like to categorically state that this subtle attempt to disunite and destabilize the unity of the Arewa Community in Lagos would be met with legitimate resistance from northerners of good conscience within and outside Lagos. We will no longer fold our arms and watch the desecration of our traditional heritage in Lagos by a confused and desperate  Commissioner, aided and abetted by a nonchalant State Government.

5. We say no to this sinister move in its entirety and wish to stress that enough of this deliberate and senseless interference with the affairs of the Arewa Community in Lagos. We have warned, whoever has an ear let him hear. Our position is unequivocal this time and we are prepared for massive legitimate resistance to this unending, undue interference.