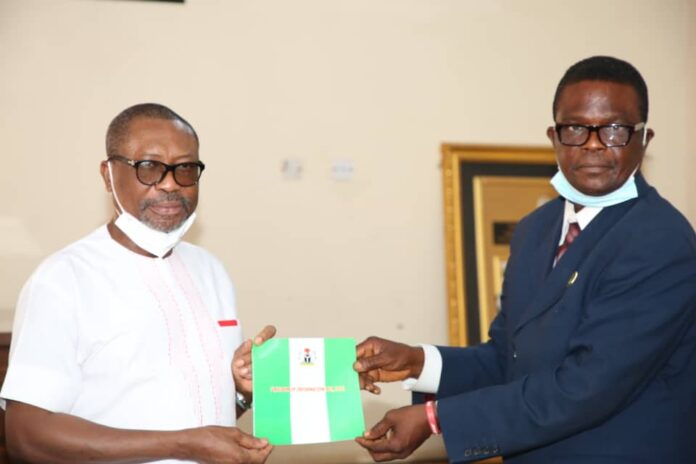 The Delta State Government has been lauded by the National Orientation Agency for its quick response to the yellow fever outbreak in some parts of the state from escalating.

The Acting State Director, National Orientation Agency, Mr. Chris Anyabuine gave the commendation on Wednesday, November 18, 2020 when he led other officials of the Agency on an advocacy visit on the State Head of Service, Mr. Reginald Bayoko in Asaba.

The Acting Director of the NOA however disclosed that the purpose of the advocacy visit was to solicit for the support and cooperation of the Head of Service for the Agency’s work plan towards its statewide campaign to eradicate open defecation.

Other awareness campaign of the Agency include the Federal Government policy towards the total deregulation of the downstream oil sector, campaign against sexual and gender based violence as well as the agency’s campaign against drug abuse amongst others.

The State Head of Service, Mr. Reginald Bayoko mni, has however described the role of the National Orientation Agency in mass mobilization and social engineering as a critical tool for national development and cohesion.

Bayoko, termed the National Orientation Agency as a powerhouse that shapes the attitudes and value orientation and reorientation of Nigerians.

On the deregulation of the downstream oil sector sensitization campaign by the agency, Mr. Reginald Bayoko told the Orientation Agency that they have a herculean task before them saying that the average Nigerian views government intentions with cynicism however good they may appear.

Speaking on the issue of modular refinery, the Head of Service stated that it was a welcome development for the people of the Niger Delta region, describing it as a veritable avenue for wealth creation that would significantly improve the overall social and economic condition of the region.

While commending the National Orientation Agency for its relentless campaign against societal ills, the Delta HOS enjoined the Agency to collaborate with the State Directorate for Orientation, other relevant government agencies and cooperate organizations for a sustained and effective campaign adding that as public servants, their obligation is to the populace.