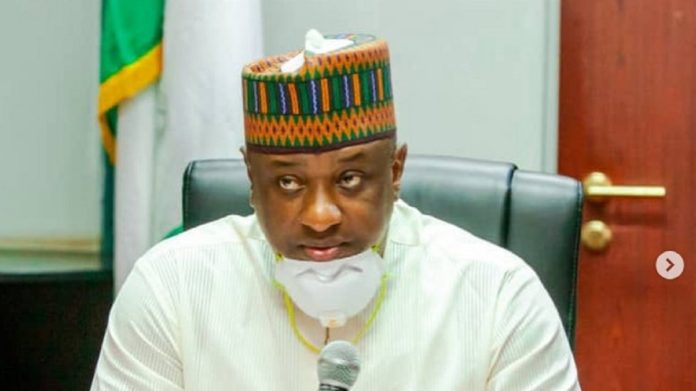 Following a directive from President Mohammadu Buhari, the Minister of State for Labour and Employment, Chief Festus Keyamo Tuesday (3/11/2020) began a tour of Delta State with a visit to the Ovie of Uvwie Kingdom palace where he met with HRM Dr. Emmanuel E. Sideso, Abe 1 JP. OON, the traditional council of chiefs, communities, women and youths leaders

In an opening address, Chief Keyamo noted that #EndSARS protest has resulted to ethnic tension in the country, and appealed to leaders to carry President Buhari’s message of peace to all parts of the country as Nigeria is one indivisible country

He appealed for cooperation with security agencies to arrest the current situation saying that the federal government was proud of Uvwie people for maintaining the peace during the #endsars protest and assured them that nothing would bypass them that they were entitled to.

Responding, the Ovie of Uvwie Kingdom, HRM Dr. Emmanuel E. Sideso, Abe 1 JP. OON expressed appreciation of the effort by President Buhari to bring his message of peace to the grassroot. “Please let the Presidentbe aware of our collective assurance to continue to sustain the peace in our Kingdom and to work assiduously for the corporate existence of our country, Nigeria”

According to him, as a Kingdom, all ethnic nationalities have been integrated into the traditional governance of Uvwie and assured the president that Uvwie will continue to be hospitable and receptive to all indigenes of Nigeria who wish to live peacefully in the Kingdom.

HRM Dr. Emmanuel E. Sideso, Abe 1 JP. OON however warned that sustenance of peace and security involved everybody and pointed out some grey areas that should lead to breach of security or agitation if not tackled promptly.

The Monarch demanded the release of 436 acres(185.20 hectares) acquired in excess of what was gazetted to the Uvwie people unconditionally with immediate effect since that was not part of the purpored acquisition.

He also wants the land sold to private developers to be returned to the original Uvwie owners with liberty to negotiate with the illegal private occupiers as well as demanded that a substantial part of the purported acquired land in 1974 be returned to Uvwie people.

HRM Dr. Emmanuel E. Sideso, Abe 1 JP. OON also demanded for a police area command in view of the facts that his Kingdom was host to critical national investment and international Oil Companies; the re-opening of Osubi Airport, re-construction of Warri-Benin Road, and appealed to President Buhari to direct NNPC to convert to permanent staff, the casual/support staff of the host and neighbouring communities with immediate effect.

Responding, Chief Keyamo disclosed that the Osubi Airport would come alive in two weeks’ time as President Buhari has already directed the NNPC to take it over. He promised to pursue the issue of Uvwie land illegally occupied by the army administratively

On the NNPC casual/support staff issue, he said it was a labour issue that a petition should be launched with his ministry. Present on the occasion were representatives of Arewa, Ibo, Yoruba, Edo/Esan, Ijaw communities as well as security agencies.