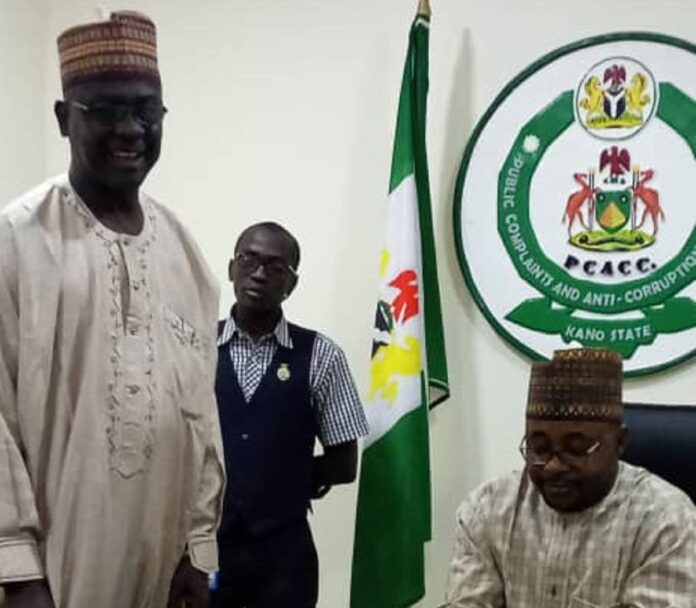 For more effective service delivery, uprightness and patriotism in the discharge of their duties, the Executive Chairman of Kano State Public Complaints and Anti-corruption Commission (PCAC), Bar. Muhuyi Magaji Rimin Gado has advocated for immediate salary increment for staff of the Commission.

He appealed to Kano state Governor, Dr. Abdullahi Umar Ganduje to increase the salary of staff of the Commission to enable them put in their best while carrying out activities.

Bar. Muhuyi, however, commended Ganduje for spending over N190 million in renovation and provision of modern facilities in the Commission’s Headquarters.

He insisted that there was a need for upward review of the  salary of workers in the Commission.

He also revealed that plans have been concluded to employ more staff so as to adequately cover the five Emirate Councils, across the 44 Local Government Areas in the state.

He, however, lamented that staff of the Commission, “are the least paid among anti corruption agencies in Nigeria and across the globe. “

The Anti-corruption Czar thanked Governor Ganduje for his concern and commitment to the welfare and progress of the Commission, he vehemently proposed for immediate salary review of staff of the Commission.

He stated that, ” we propose for an increase in the staff salary which will boost their moral and also discourage them from falling prey to temptation,” he added.

“We are decentralizing our office to cover the five Emirate Councils and also to reach out across the 44 Local Government Areas.  We are happy that our people love what we are doing. We are happy our people are also supporting us with information and verifiable  petitions of corrupt practices.

“We have plans to expand our offices across the 44 Local Government Areas. Get them cars and other necessary facilties that will enable them work in conducive environment.”

According to him, Ganduje ordered for the total renovation of the Commission headquarters, including the provision of a clinic, modern  cell, new administratiin block, studio,  as well as sophisticated modern communication equipment with customised software of world class standard.

Bar. Muhuyi said while renovating the Commission’s headquarters, he was mindful of the challenges of people with disabilities and made sure that facilities that will ensure their comfort were also provided.

According to him, the state has set the pace in the fight against corruption among states in the country, pointing out that, “even if I leave the Commission, I know I have left the place in a shape that cannot be brought down.”

In his remarks, after being conducted round the modern headquarters of the Commission by the Executive Chairman, the Kano state NUJ chairman, Comrade Abbas, extolled Governor Ganduje for giving the Commission a face-lift.

According to him, ” I want to say that what we have seen here today is evidence-based. I am not being psychopathic, this tells you that Bar. Muhuyi is a force to reckon with.