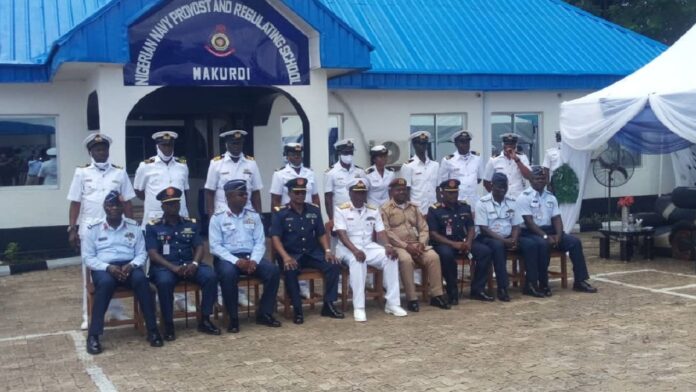 The Nigerian Navy Provost and Regulating School, Makurdi, has graduated 29 ratings out of 34 nominated for the exercise.

The three months’ training is aimed at maintaining discipline and euip them to carry out proper investigation into offences and crime prevention.

The Special Guest of honor and representative of the Air Officer Commanding, Tactical Air Command, (TAC) Nigerian Airforce Makurdi, Air Commodore Shehu Bakari, congratulated the graduands and described the exercise as imperative not only to the Navy but also to the entire armed forces.

He therefore urged the graduands to live up to expectations at all times and save the navy embarrassment.

Air Commodore, Bakari, commended the Chief of Navy Staff and other management staff for their untiring effort at making sure naval personnel are given the best discipline and training, just as he tasked the graduands to read in between the lines on Navy regulations and develop themselves to curb crime and criminality.

He further expressed hope that they will apply the procedures correctly and become role models as he maintained that with the current information age, they have no excuse to fail.

Also Speaking, the Commandant of the School, Commodore Umar Chugali, thanked the Chief of Naval Staff for the opportunity and support to conduct the courses as well as the Flag Officer Commanding, Naval Training Command for his guidance and support in the last 12 weeks.

He said as the graduands were selected to enforce discipline, law and order in the Navy, the Armed forces and beyond.

Meanwhile, the Chief instructor of the school, Lieutenant Commander, Segun Adebajo, said the training and it is a professional course which is compulsory for them to get to the next level, as they were designed to enhance their knowledge in line with modern day happenings in investigation and crime prevention.

According to him, crime is now going digital which has made the school to introduce new courses such as cyber crime and counter terrorism investigation among others to enable them be above crime offenders.

The chief instructor, however, maintained that graduands performed beyond average, with two persons coming out with first class, two second class and four third class at the Master -at -arms qualifying course.

Highlights of the occasion was the presentation of certificates and awards to best graduands, while the commandant commended Governor Samuel Ortom for issueing them Certificate of Occupancy for their permanent land.