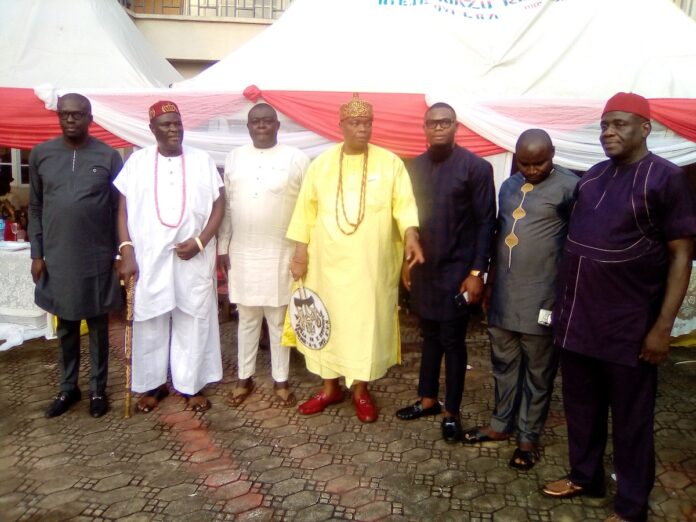 Anambra Youths indulging in illegal land grabbing, speculating and sales have been advised to desist from such nefarious activities and in its stead, embrace agriculture, skill acquisition or any other meaningful employment that would showcase them as responsible citizens.

Speaking during Nteje New Yam festival, Igwe Odegbo warned perpetrators of such act with the older people who support illegal land sales that State Government has decided to arrest the situation.

“Youth restiveness and youths engaging in Land Grabbing is very bad. It is asinine and against development. Government has decided and we will soon stop it here.  If a youth cannot get education, let him learn a trade. We invested in a huge, well equipped Skill acquisition center sited here in Nteje. I advise such youths to emulate their responsible father’s who engaged in agriculture”, said Igwe Odegbo.

According to Igwe Emeka during Umueri new yam festival, “Youths should not involve themselves in robbery, cultism and other Social vices synonymous with youths. Youths should embrace agriculture and its value chain, look inwards, form co-operative soceities because Anambra Governmt is willing to assist Farmers  instead of waiting for white collar jobs.

Hon Obinma stated,” Our elders did not survive by land sales. Nobody has Monopoly of violence.Anambra has  fertile lands. It surprises me why these jobless youths will not embrace agriculture which is the power House of most economies in the world”.

The duo of Hon Chinweze and Areh Onyenze lamented on the manner by which youths adopt hooliganism, violence, intimidation and black magic to harass elders and constituted authorities, sell and re-sell both individual and communal lands which were not theirs out of greed and avarice with reckless abandon without knowing that it has cosequence.

Moreover, Barr. Humphrey Udechukwu one of the legal advisers to Nteje community on land dispute also urged recalcitrant youths who sell anscestral lands with their accomplices to have a rethink adding that he with other members of the land dispute committee would do their best to broker peace among aggrieved persons.

Another youth leader, Chief Ikem Ochinanwata frowned at youths that refuse to embrace creativity, hard-work and legitimate business but resort to land grabbing saying that it was a mark of laziness and irresponsibility because wealth that endures does not emanate from selling of other people’s land through hook and crook.

Ezeani Amuche Umuonuora, Pius Okeke said that it was a taboo in the olden days to sell lands moreso when it is a stolen land adding that the land grabbers would face the wrath of God at the appointed time if they do not repent. He thanked God for marking the end of famine and blessing the people with bountiful harvests.