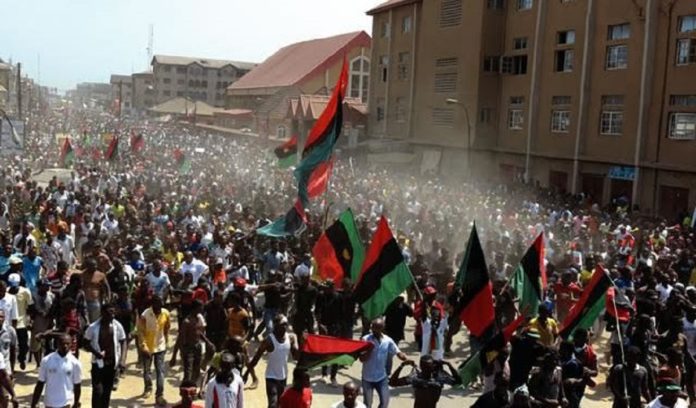 Anambra based couple, Mr. Ikechukwu Muoka and his wife, Veronica,  have raised the alarm over alleged disappearance of their son, Lotanna Charles, who they said, was last seen on November 16, 2014.

In a press conference in Onitsha, the commercial nerve center of Anambra State, Mr. Ikechukwu Muoka, father of the alleged missing young man, said him and his wife were presently in very bad health status, as a result of worries over their only son, Lotanna.

He said: “Our son, Lotanna Charles Muoka, got missing since 16th November, 2014, in Onitsha. As we speak, we cannot tell whether he is dead or alive.

“Our son, Lotanna, until his sudden disappearance, was a young Igbo youth activist, who was a strong believer in Igbo freedom and independence.

“We started looking for him immediately he was reportedly invaded by the Nigeria police, where he was  having a meeting with his co-Igbo freedom fighters, at Nkutaku area of Okpoko, a swampy zone in Ogbaru LGA, Anambra  State; where they were allegedly strategizing on how to actualise the Sovereign State of Biafra.

“People, who saw what happened, said they were tear-gased, beaten to pulp; and  that they were left with life threatening injuries, thereby, heightening the speculation that he eventually died.”

He said that their son, popularly known as ‘Ogbuefi Biafra’ or ‘Biafra Must Be,’ who he said, had perchance for Igbo freedom, was an unrepentant member of  two pro-Biafra groups: Movement for the Actualization of the Sovereign State of Biafra (MASSOB) and the Indigenous People of Biafra (IPOB); which were recently outlawed by the federal government.

“Since that incident, we are yet to see our son or hear from him, and  all moves we have made to know the whereabouts of our son, remained futile,” he said.

When our reporter contacted the Anambra State Police Public Relations Officer, SP Haruna Mohammed, over the matter, he said he was not in Anambra in 2014, when the incident allegedly took place; adding that the incident had no official record.

However, confirming the development, a police source, who spoke to our reporter on the condition of anonymity, because he was not authorized to do so, said several cases of that nature took place in 2014 till the present time, mostly in Okpoko, Nkpor, Obosi, Aba and Umuahia in Abia State, among other south east communities; adding that the case, although not recorded in police diary, was one of the numerous cases, where members of Nigeria police force had violent confrontation with members of the IPOB and MASSOB over freedom agitation.

He said: “As far as the Nigeria police is concerned, IPOB and MASSOB are outlawed groups, and any member of the organizations, who engage in any unlawful activity, will face the music.”

It will be recalled that few weeks ago, a group of IPOB members, who were having their meeting at a location in Enugu State, were confronted by combined team of the police and army; a development that attracted international condemnation.