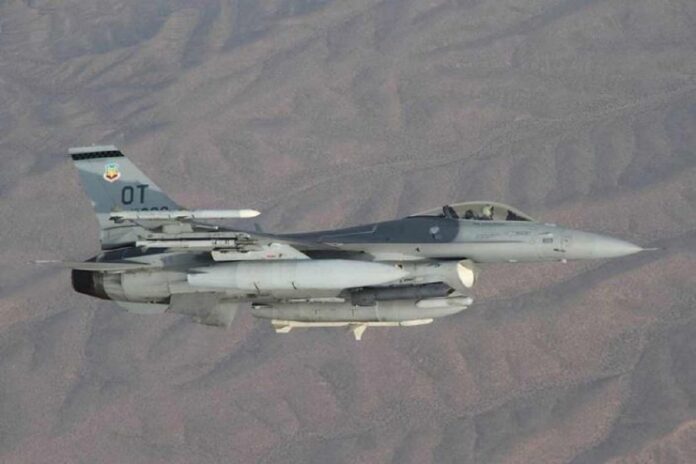 The Air Force recently tested a new next-generation fragmentation bomb on the F-16 Fighting Falcon meant to be an alternative to cluster munitions that diminishes the risk of unexploded ordnance, according to a news release.

Through a series of flights held in July, the 28th and 422nd Test and Evaluation Squadrons measured battle damage from the BLU-136 Next Generation Area Attack Weapon at the Nevada Test and Training Range, according to Air Combat Command.

“The operational tests were designed to gather data to determine the operational performance of the BLU-136, specifically in the areas of blast and fragmentation damage,” Lt. Col. Daniel Lambert, 28th TES Global Strike division chief, said in the release. “This data will help decision makers determine if the BLU-136 is a viable substitute for the Air Force’s fleet of cluster bombs.”

The 2,000-pound bomb is intended for “light vehicles, light structures and personnel,” the release said. When paired with a joint direct attack munition (JDAM) GPS-guided tail kit, the BLU-136 becomes the GBU-31v11 bomb; and because it’s compatible with the JDAM kit, it will be ready for operations “if and when fielded,” Lambert said.

“This also means that the delivery of the GBU-31v11 from any other aircraft will likely require little to no changes in loading or delivery tactics,” he added.

During the test, personnel drew several rings — 75, 150 and 225 feet in radius — around the intended target, explained 1st Lt. Savanah Bray, spokeswoman for the 53rd Wing, Eglin Air Force Base, Florida.

After the test, they found fragments exceeding 225 feet from the center of the target, she told Military.com on Wednesday. “Within 150 feet, severe damage is likely to occur,” she said.

But the fragments themselves are non-explosive, “making it a less-hazardous alternative to cluster munitions,” the release said.

The Pentagon for decades has used cluster bombs, which, when broken apart, disperse smaller bomblets or submunitions through their target.

Cluster bombs are not without controversy: The New York Times in 2017 reported that the weapons’ “dud rate” often approaches 20% when deployed in combat situations, meaning they frequently fail to detonate when they’re supposed to and thus can make the environment extremely dangerous to friendly forces and civilians.

That same year, the Pentagon reversed its plan to ban cluster munitions and kept its stockpiles, citing threats from North Korea as the reason to keep the munitions.

Then-Deputy Defense Secretary Patrick Shanahan said that developing a replacement for cluster bombs would take too long when faced with the North Korean threat, so the Pentagon looked to its available capability.

The Pentagon was tasked by President George W. Bush’s administration to bring cluster bombs’ failure rate under 1% or find an alternative. However, the Defense Department said the U.S. military’s efforts to develop more reliable, and thus safer, cluster munitions that have a failure rate of 1% or less were unsuccessful, the Associated Press reported at the time.

Nonetheless, Shanahan signed a directive that December to end a 2008 policy approved by former Defense Secretary Robert Gates, which had stipulated the Pentagon would “no longer use cluster munitions which, after arming, result in more than one percent unexploded ordnance” by the end of 2018.