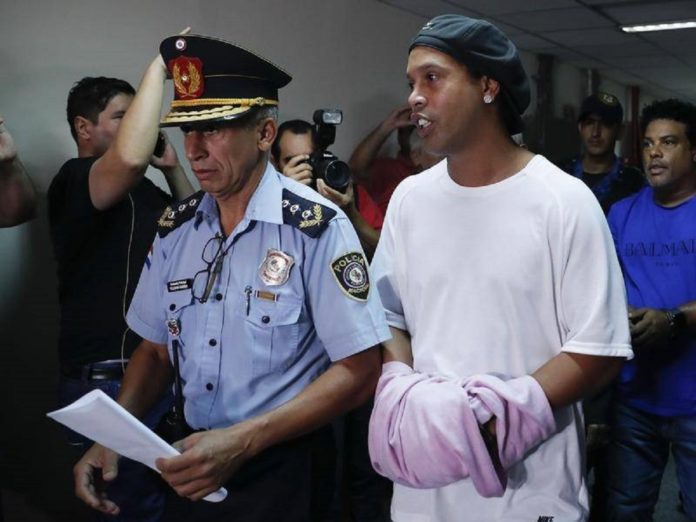 Former Brazilian international Ronaldinho Gaucho was ordered to remain in jail in Paraguay on Saturday after a judge ruled him a flight risk.

The ex-FC Barcelona forward was arrested on Friday for attempting to enter Paraguay with a false passport two days earlier.

He spent Friday night in a police cell along with his brother and business manager Roberto Assis.

The pair asked to be released into house arrest but that was rejected by the judge, who also dismissed Assis’s claims to have a heart problem because he showed no proof.

Judge Clara Ruiz Diaz said their alleged offence was a “serious one against the interests of the Paraguayan state”.

“Because the pair posed a flight risk they must remain in custody,’’ she added.

Under Paraguayan law, officials now have six months to complete their investigation.

But Ronaldinho’s lawyers, who called the decision “incredible,” are expected to present an appeal in the coming days.

Saturday’s courtroom drama came after an astonishing four days that began on Wednesday when the duo attempted to enter Paraguay with doctored passports.

They were detained but a prosecutor who believed they were tricked into taking the fake documents recommended they be released after receiving an alternative punishment such as paying a fine to charity.

A judge, though, rejected that idea late on Friday and shortly afterwards the pair were arrested.

A police official told local media the pair had been placed in a cell with one other inmate.

They were given soap, cushions and repellent to protect against mosquitoes.

Although workers at the facility took selfies with the famous detainee, officials said the Brazilians did not receive any preferential treatment.

Paraguayan television showed the two men arriving in court in handcuffs at around noon local time on Saturday.

The brothers were invited to Paraguay by a local casino owner and had arrived on Wednesday to take part in a football clinic for children and a book launch.

Although he last played professionally in 2015, Ronaldinho, who also represented Brazilian clubs Atletico Mineiro, Flamengo and Fluminense, is still hugely popular with global football fans for his skills and showmanship.

He won the World Cup with Brazil in 2002 and the Champions League with FC Barcelona in 2006.