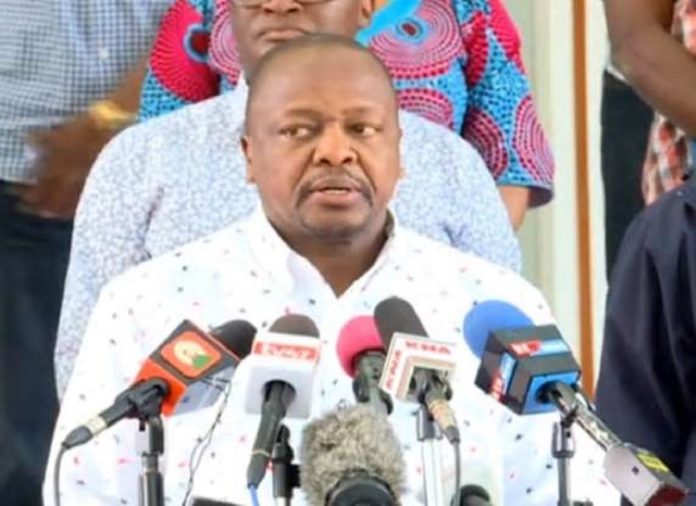 – He has thus ordered suspending of all international flights from March 25, banned all church services, funerals (limited to 15 people) and weddings

Mutahi Kagwe et al. around each other: All the eight are imported cases from Europe and America. The ages are between 20 for the youngest and 57 years for the oldest.

All the eight are imported cases from Europe and America. The ages are between 20 for the youngest and 57 years for the oldest.

This brings the total to 15 since the first case was reported in Nairobi on Friday, March 13. Out of the latest eight cases, five are Kenyans and three are foreign nationals.

All the eight are imported cases from Europe and America. The ages are between 20 for the youngest and 57 years for the oldest.

“Much to our disappointment, we have noted that the majority of our people have continued to ignore these measures and are behaving as if it is business as usual. As I cautioned last week, this disease is not a joke.

Kenyans must treat this matter with the seriousness it deserves by adjusting and changing their lifestyles. If we continue to behave normally, this disease will treat us abnormally. Behaving normally under these circumstances is akin to having a death wish,” Kagwe said as he spelt out more stringent rules to ward off the killer infection.

Kagwe said that everyone coming to the country will undergo compulsory self-quarantine at a government facility at their own cost.

“Whereas we had allowed Kenyans to come into the country, we have observed that there are those who are not observing this; we have therefore decided that all persons who violet self-quarantine would be forced to quarantine and thereafter arrested and charged,” the CS said.

Slide 1 of 131: A soldier guides passengers arriving from Turin and Milan by train to Naples Central station while they wait to get their self-certification documents checked as Italy ramps up measures to slow the spread of coronavirus disease (COVID-19) in Naples, Italy, March 22, 2020. REUTERS/Ciro De Luca

A soldier guides passengers arriving from Turin and Milan by train at the Naples Central station as they wait to get their self-certification documents checked, in Italy on March 22.

This, the CS said, would apply to a senior government official in Kilifi who refused to self-quarantine even after testing positive for coronavirus.

Effective midnight today Sunday, March 22, the health CS said all bars will remain closed until further notice. Restaurants will, however, remain open but for purposes of takeaway services.

The CS banned all church services, funerals and weddings.

His remarks were echoed by Interior PS Karanja Kibicho and Police Inspector General Hillary Mutyambai who vowed to enforce the new directives.

“Having noted non-compliance on the part of religious leaders, govt has suspended all churches, mosques and funeral and other social gatherings.

Funerals are restricted to 15 immediate family members only,” said Kagwe who visibly appeared disturbed by citizen’s non compliance to the directives already issued.