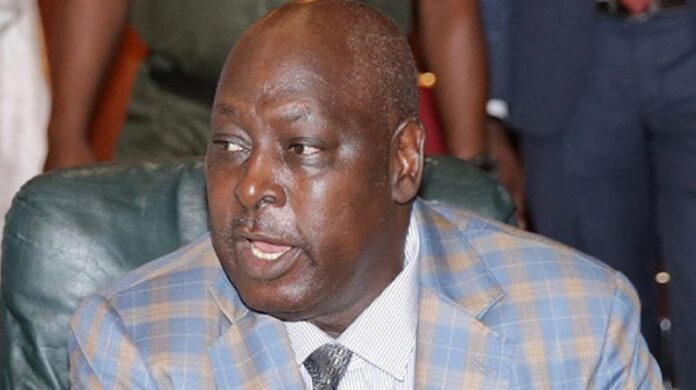 “Each time a man stands up for an ideal, or acts to improve the lot of others, or strikes out against injustice, he sends forth a tiny ripple of hope, and crossing each other from a million different centers of energy and daring, those ripples build a current that can sweep down the mightiest walls of oppression and resistance”- Robert Kennedy.

When Robert Kennedy made the above quotation, he probably had Engineer Babachir Lawal in mind. Babachir Lawal’s current struggle against what many have come to see as violation of unquestionably entrenched political culture in Nigeria- faith balancing in Nigeria’s two most important posts, the President and Vice Presidency seats; has undoubtedly made him a leader for equity, justice and fairness in Nigeria. Lawal is striking out against injustice of Muslim-Muslim Presidential ticket in APC, which is sending forth a tiny ripple of hope, it is crossing each other from a million center of energy and daring, those ripples are building a current that is about sweep down mighty wall of oppression and resistance (emphasis mine, but a modified version of Robert Kennedy’s quote above).

Before now, engineer Babachir Lawal was the arrowhead of Bola Tinubu’s candidacy in APC on the strength of 8 years for the North and 8 years for the South. He was the leader of Tinubu Support Groups (TSG). He led his group to the national headquarters of the party to submit Tinubu’s Expression of Interest and Nomination forms.  According to him on the day the form was submitted: Tinubu is 100 per cent prepared for the convention slated for May 30 and June 1 and will clinch the party’s 2023 presidential ticket. Vanguard newspaper had this caption on May 11, 2022; 2023:  Tinubu will triumph in APC primaries – Lawal.

Hear vintage Lawal—“We feel elated that today we’ve come to submit the winning form and we have complied with one of the major requirements of the party for contesting for presidency on the platform of APC. We’ve done all that is required we’ve submitted all the required documents as you can see. “We have received our acknowledgement copy and we’re confident that victory will be ours come May 30th during the convention,”—. “So the more the merrier, they are all welcome,” —. — “He is a democrat, every politician should not be afraid of election because the probability are two; either you win or lose. —“So, if we win at the convention, we will go back home, we will leak our wounds and prepare to support the winner if he wins in a fee and fair manner.–“There are no challenges. We are politicians, we have been in this game for many years, whatever challenges there are, we have already converted them into opportunities,” –.

The question now is, if a man can say these lofty things about Tinubu, what is the actual reason that made him turn his back on the same man he helped to win the primary election of his party? Before this question is answered, one must study the surrounding issues around opposition to Tinubu’s choice of Vice President, from the perspective of notable personalities in APC. Without going too far, the current Vice President of Nigeria, Professor Yemi Osinbajo, is one notable Yoruba man opposed to Muslim-Muslim ticket in APC. Why is he too, protesting against the same faith ticket? Is it because he lost out at the primary election of the party? Or is it because of the need to preserve the political culture of Nigeria? Now that Babachir Lawal, Professor Yemi Osinbajo and millions of Nigerians across faiths are against the same faith ticket, it will safe to say that the need to preserve the political culture of Nigeria is the main reason behind Babachir Lawal fight against Muslim-Muslim ticket. If not, he would not have supported Tinubu at the primary.

It will be safe to say that Babachir Lawal is rightfully angry because Tinubu did not pick him or a Christian from the North as the Vice Presidential candidate, in furtherance of preserving Nigerian political culture. Only a politician without base will say Muslim-Muslim or Christian-Christian ticket does not matter in Nigeria of today. Besides, if the same faith ticket does not matter, why is it that only APC is flying the same faith ticket in Nigeria?

Even most strategists of candidates of other political parties, were so shocked at the decision of Northern APC Christian members, that they have embarked on propaganda to whittle down the domino effect of the tsunami caused Babachir Lawal-led APC group. And the good aspect of fighting a just cause is that the beneficiary of the injustice is morally weak to raise a voice. Read what Reno Omokiri said on his Twitter handle on November 24, 2022: “Babachir Lawal works for Tinubu. He was made the Secretary to the Government of the Federation by Tinubu. He was protected from EFCC by Tinubu. He is endorsing Peter Obi on Tinubu’s instruction, to dilute Atiku’s Northern votes. Northern Christians, refused to be used”! Reno Omokiri probably forgot that the same Babachir Lawal had on national TV said Tinubu told him during APC primary election that campaigning in South-East and South-South was a waste of time and money.

By this singular move, Babachir Lawal has become a big political iroko that cannot be ignored in Nigeria any longer. He has cemented his place as influential and respected leader in the North, no doubt. Indeed, it is in the midst of crisis that a leader is born and Babachir Lawal is that leader.

Wrote in from Abuja.