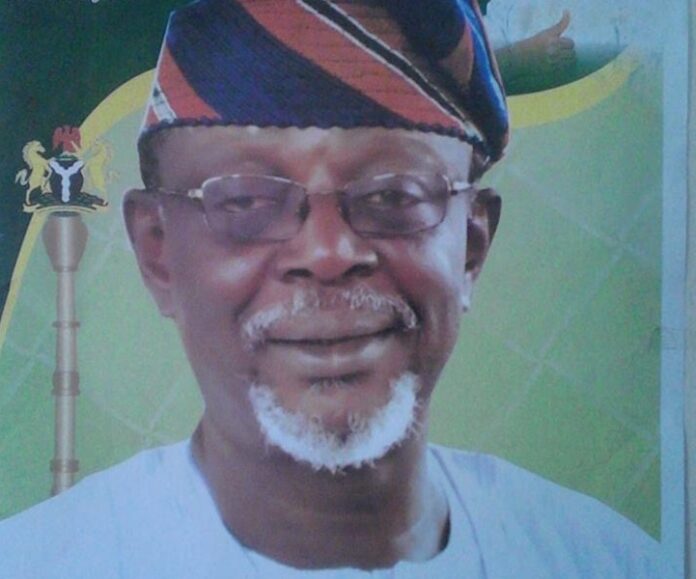 Another long time associate of  the Presidential Candidate of the All Progressives Congress, Bola Ahmed Tinubu, Mueez Akande has died. Akande was also the brother-in-law to Tinubu’s wife, Senator Oluremi Tinubu. Akande was linked to drug trafficking business in the United States of America along with Bola Ahmed Tinubu.

The deceased was 72 years. Akande was the husband of Lola Akande, a sister to Oluremi, and current Lagos State Commissioner of Commerce, Industry, and Co-Operatives. The death of the septuagenarian was confirmed by the bereaved wife.
The death of the medical doctor, a close friend and confidant of Tinubu, brings to two, business and political associates of the APC national leader who have died in the last 48 hours.

Another friend, confidant, and Lagos lawmaker, Olayiwola Olawale, popularly called Omititi, who died in Jos, the plateau state capital during the APC presidential rally was laid to rest in Lagos yesterday, according to Islamic rites.
The death of Akande came at a time the certified true copy of settlement judgement ordering Tinubu to forfeit $460,000 drug money under the narcotic section of the US criminal code is generating controversy in the country.

The Certified True Copy of the court documents, which included the judgement delivered by Magistrate John Nordberg of a United States District Court, Northern District of Illinois, Eastern Division, was dated August 10, 2022, and signed by Thomas Bruton and Johnny Khuu, both Clerk and Deputy Clerk, respectively, of US District Court, Northern District of Illinois.
The documents revealed how Tinubu and his associates were involved in the distribution of white heroin and money laundering between 1988 and 1992, when investigations closed in on them.

According to the documents Tinubu’s involvement in the shady deal was traced to the arrest of one Abiodun Agbele, who was nephew to one Adegboyega Mueez Akande, a major drug trafficker between the US and Nigeria.
The document read in part, “Beginning as early as 1998, Adegboyega Mueez Akande, with others operated an organisation which distributed white heroin, a controlled substance under Title 21 of the United States Code.

“This distribution operation was conducted on a large scale and the proceeds of the operation substantial.”
In a Verified Complaint for Forfeiture of funds in several accounts linked to Tinubu in First Heritage Bank and Citibank in the US, a United States Attorney, Michael Shepard, had narrated how Tinubu opened about 10 accounts in the name of Bola Tinubu and Compass Finance and Investment Limited in late December 1989 and January 1990, wherein he deposited funds far in excess of his earnings in Mobil Oil, where he was working at the time.

In an affidavit deposed to in support of the Verified Complaint for Forfeiture by a Special Agent with US Internal Revenue Service, Mr. Kevin Moss, Tinubu was said to have contradicted himself during interrogation on his relationship with Agbele and Akande. While in one breath he admitted to receiving $100, 000 from Akande and used $80, 000 of the money to open the Heritage account, he had at another time denied having any financial relationship with Akande. He also denied having any other bank accounts in the US.

Based on the above, Moss said they had cause to believe “that the funds in the amount of $460,000 in account in the name of Bola Tinubu represents proceeds of narcotics or were involved in financial transactions in violation of 18 U.S.C ss 1956 and 1957 and therefore these funds are forfeited to the United States”.
Shepard noted that although, “a less prima facie” case was established against Tinubu, the case was beyond mere suspicion, hence, a motion ex-parte application for order for seizure of the said funds was made by the US attorney on August 18, 1993, which was subsequently granted.
“It is hereby ordered that the United States Marshall shall hereby have authority to execute the warrant of seizure and monition issued ….by serving the warrant on mail on Citibank and First Heritage Bank,” the documents read regarding the judgement.

Ever since he returned to Nigeria from the US, he had lived under the radar only associating with a handful of people.
Akande, according to family sources had been ill for some time but it is not clear whether his alleged illness ultimately led to his demise. As of the time of this report, all efforts to confirm how he died from close family sources proved abortive.
Meanwhile, Lagos State Governor, Mr. Babajide Sanwo-Olu, has commiserated with the Commissioner for Commerce, Industry and Cooperatives, Dr. Lola Akande, on the death of her husband.
Sanwo-Olu, in a statement issued yesterday by his Chief Press Secretary, Mr. Gboyega Akosile, symphatised with Lola Akande over the demise of her lovely husband.

The governor also implored members of the Akande family, the deceased friends and associates to take the death of Kolapo Akande in good faith.
Sanwo-Olu urged people to see Akande’s demise as the will of God and take solace in Him for a good life spent by the deceased during his lifetime and his contribution to humanity.

He said: “On behalf of my family, my cabinet, the Lagos State government, and the people of Lagos State, I commiserate with the Commissioner for Commerce, Industry and Cooperatives, Dr. Lola Akande, on the death of his beloved husband, Dr. Kolapo Akande.
“Dr. Akande lived a fulfilled life. He will be sorely missed by his family and loved ones. We sympathise with the Akande family, the wife, children and the entire extended families of the deceased.

“I pray for the repose of Dr. Kolapo Akande’s soul. God will grant him eternal rest and comfort the family, friends and associates he left behind.”