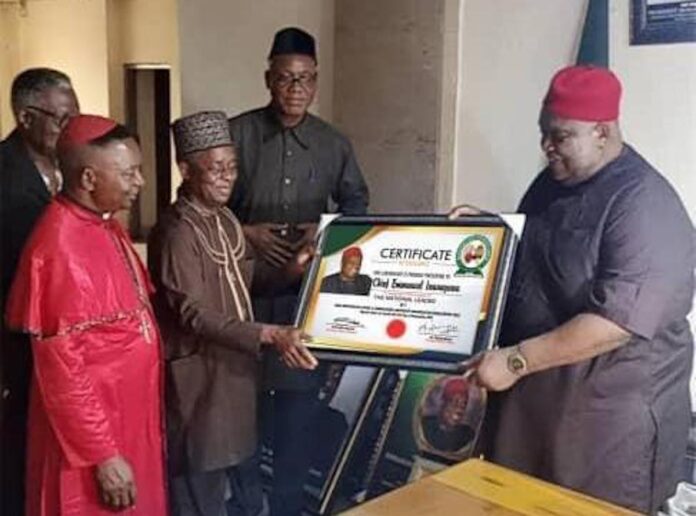 Chief Emmanuel Iwuanyanwu (CFR), an astute businessman and politician has added another feather in his chains of accolades as prominent Igbo leaders, under the aegis of Igbo Indigenous Elders and Stakeholders Leadership Organization, IGBELDERS, conferred on him the national leadership of the organization

Already Iwuanyanwu is the current Chairman of Ohanaeze Ndigbo Council of Elders and Ahaejiagamba of Ndigbo, among other chieftaincy and patronship titles.

The national leadership title was conferred on him by a delegation of leaders and stakeholders from the South East zone, led by Justice Alpha Ikpeama (Oganiru Ndigbo bu Nke Anyi), the Chairman of Board of Trustees, BoT of IGBELDERS when they paid him a courtesy visit at his office in Owerr, the Imo state capital

Presenting the certificate to him, the leader of the delegation, Justice Ikpeama explained that Igbo Indigenous Elders and Stakeholders Leadership Organization is a body of Igbo elder statesmen, major stakeholders, opinion leaders and leaders of thought in Igboland both within Nigeria and in the Diaspora – the critical thinkers in Academics, Professions, Commerce, Trade, Industry, Agriculture, Mines and Power; Champions of Health and Social Services.

Ikpeama who extolled Iwuanyanwu’s leadership dexterity, having over the years given Ndigbo quality Leadership not just as the Chairman of Ohanaeze Ndigbo Council of Elders but as father to the Leadership class in Igbo land across party lines and having mentored and raised many successful national, regional, state and even local government leaders across Ala-Igbo., noted that Iwuanyanwu’s decision to quit partisan politics at 79 years was the best decision in the interest of all leaders in Igbo land who consider him as their national leader.

He therefore urged him never to relent in playing his roles as an Elder Statesman now that Ndigbo need the voice of the Elders more than ever before to ensure peace is restored to Ala-Igbo.

He stressed that Igbo youths need to be guided aright by the elders, like Iwuanyanwu to ensure their grievances are properly channeled to appropriate quarters without causing destruction of lives and properties, even as he pleaded with him never to relent in doing so.

Justice Ikpeama further explained that IGBELDERSHIP ORGANIZATION is a non-profit, non-religious and non-governmental organization with no political affiliation, adding that it is duly empowered by the Government of Nigeria to form a common front and ideology for good representation and quality leadership in Igboland.

This, he said, is encapsulated in an all inclusive joint meeting of IGBO ELDERS AND STAKEHOLDERS NATIONAL ADVISORY COUNCIL both within Nigeria and in the Diaspora for the noble aim of bridging the cultural, political and religious gaps in Igboland, interfacing with government at all levels with a view to promoting peace, harmony and good governance/leadership.

“In a short form, this organization unites Igbo Elders and Stakeholders think-tank/think home with the aim of providing an effective platform for transmitting progressive ideas to government at all levels and those in leadership positions, hence political party manifestos, ideology, religious denominations and ecumenism, personal interests, views and opinions on matters of public interest, shall not present any barriers”.

A member of the delegation Bishop Dr. Barn Emeka Chinwuba, (JP) stressed that Chief Iwuanyanwu, as the AHAEJIAGAMBA NDIGBO – a title given to him by South East Traditional Rulers from the Seven Igbo speaking states namely: Imo, Abia, Anambra, Ebonyi, Enugu, Delta, and Rivers States – is highly respected across the length and breadth of Nigeria, so his quintessential leadership qualities are needed now that Ndigbo are crying for justice and equity in Nigeria.

Responding, Chief Iwuanyanwu appreciated the delegation for the honour given him and promised to use his office to give the organization all the needed support to ensure their vision is actualized.

Iwuanyanwu commended the organization for their ability to galvanize prominent Igbo Leaders to equally form the Leadership Organization in their various states and assured them that he would assist them reach out until elders of Igbo land are properly galvanized to ensure peace and stability is restored in Igbo land.

He recalled that he and the President-General of Ohanaeze Ndigbo, Prof. George Obiozor, amongst other Igbo Leaders, were able to intervene when some northern youths were planning a reprisal attack because of the murder of Ahmed Gulak in Imo State.

According to him, “It took our intervention and elderly wisdom to assuage the north and peace was restored thereby averting a repeat of the 1966 incident in Nigeria. This and many other stabilizing roles I have been able to play and I will continue to play in my capacity as Chairman of Ohanaeze Ndigbo Council of Elders”.

In their separate speeches, the above-named dignitaries commended the group for the visit and honour to Iwuanyanwu, their Leader and announced their automatic membership of the organization while pledging to support Iwuanyanwu as the National Leader of the organization to ensure that peace and stability is restored in Igbo land for sustainable economic development of Ala-Igbo.