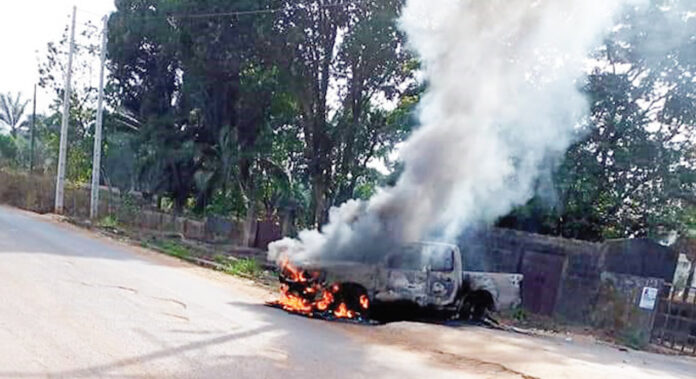 It was a harvest of deaths in Anambra state yesterday and early this morning when four persons were gunned down by suspected cultists in Awka Capital, two police men and a suspected hoodlum killed when Police zone 13 station was burnt .
According to an eye witness hoodlums stormed the newly commissioned zone 13 Police headquarters in Ukpo Dunukofia local government area of Anambra state by 3, 45 am and attacked the premises, burnt down five vehicles.
The officers and men of the zone responded swiftly and gunned down one of the hoodlums who was carried away by his members.
The hoodlums killed two police men an inspector and a constable which was confirmed by the Commissioner Mr Monday Bala Kuryas who came to inspect the area hours later.
Similarly four persons were gunned down by suspected cultists in Awka yesterday between 9,34am and 3,45 pm and as at the time of sending this report it is not clear the cult group behind the killings.
When contacted the state police Public Relations Officer DSP Tochukwu Ikenga confirmed the two incident but told reporters to await the statement of the zone 13 Police Public Relations Officer Nkiru Nwude.
Meanwhile a detachment of the Mobile Police 29 base have been deployed to take over major flash points in Awka Anambra state capital.