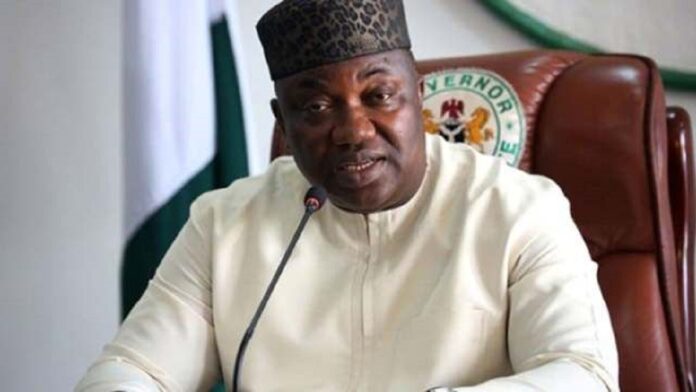 Governor Ifeanyi Ugwuanyi of Enugu State, on Friday, received the six National Youth Service Corps (NYSC) members from the state who were among recipients of the President’s NYSC Honours award in Abuja, on February 11, 2021, for distinguishing themselves creditably in the service of their fatherland, during the 2018/2019 service year.

The six awardees from Enugu State, alongside others across the nation, were also given automatic employment and scholarship for their post- graduate programmes by President Muhammadu Buhari who directed the relevant government agencies to ensure timely implementation of all the incentives for the award recipients.

Receiving the Enugu State indigenes, at the EXCO Chambers of the Government House, Enugu, Gov. Ugwuanyi who described them as “our ambassadors and the very best we have”, thanked God Almighty for their successful and outstanding service year.

The governor applauded them for returning home with the prestigious Presidential awards, saying: “Since you have done our dear state this great honour, our prayer is that more honours will come your ways”.

He equally commended the NYSC in the state for the sterling performance of the awardees and went further to announce a donation of N10 million to the agency, and a cash reward to the six award recipients in appreciation of their patriotic zeal and dedication to service.

In his brief remark, the Enugu State NYSC Coordinator, Mr. Sam Ujogu, expressed gratitude to Gov. Ugwuanyi for granting them audience, stressing that “it is a living testimony that you have been very passionate about the NYSC scheme in Enugu State”.

Mr. Ujogu disclosed that the governor has demonstrated his administration’s support to NYSC scheme in the state, in so many ways, especially the construction of the perimeter fence of the camp, which he said, has improved the security of the federal government facility during camping activities.

“Before now we have been having altercation and encroachment in the camp, but with the fencing of this facility by Gov. Ifeanyi Ugwuanyi’s administration, the security is now very assured and when the Corps members come they feel very relaxed and secured”, he said.

The NYSC State Coordinator disclosed that the Corps members won a “digit trophy” during a nation-wide competition, “for the first time in the history of Enugu State”.

He revealed that “in addition to the six Corps members who were awarded the Presidential Honours Award in Abuja, there were two others who served in Enugu State and were in the awardees’ list but were incidentally not indigenes of Enugu State”.

Expressing further gratitude to Gov. Ugwuanyi for his immense contributions to the success story of the NYSC scheme in Enugu State, the State Coordinator beseeched God to bestow on the governor the strength, wisdom and fortitude to continue to discharge his responsibilities diligently, reiterating the federal agency’s commitment to development of the state.

Other dignitaries at the event include, the Leader of the Enugu State House of Assembly, Rt. Hon. Ikechukwu Ezeugwu, the member representing Ezeagu Constituency, Rt. Hon. Chima Obieze and the Special Assistant to the Governor on NYSC Affairs, Ferguson Chimaroke Nnamani.