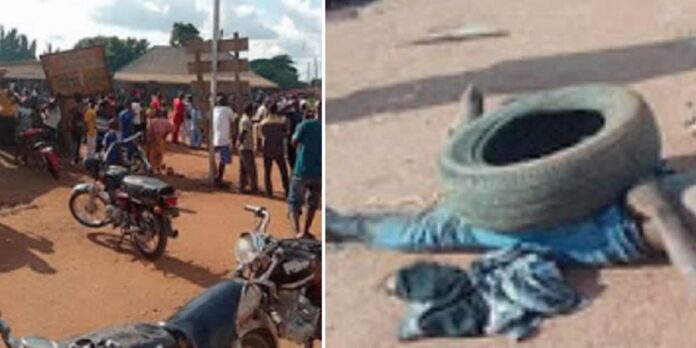 The Police in Benue on Sunday said a robbery suspect was set ablaze by an angry mob while attempting to steal a motorcycle in Makurdi.

The Police Public Relations Officer (PPRO) in the state, DSP Catherine Anene, disclosed this to the News Agency of Nigeria (NAN) in Makurdi through a text message.

Anene said that the command received a piece of information that a young man, while attempting to snatch a motorcycle from its rider, was arrested by the mob and immediately set ablaze.

She, however, appealed to the public to stop taking laws into their hands, and rather report all cases to appropriate authorities for action.

“Information was received at Wurukum area that a young man attempted to snatch a motorcycle from a cyclist and was arrested by a mob.

“On reaching the scene, it was discovered that the suspect had been set ablaze.

“The command condemns such lawlessness and warns that members of the public should seek justice through the appropriate channels,” she said.