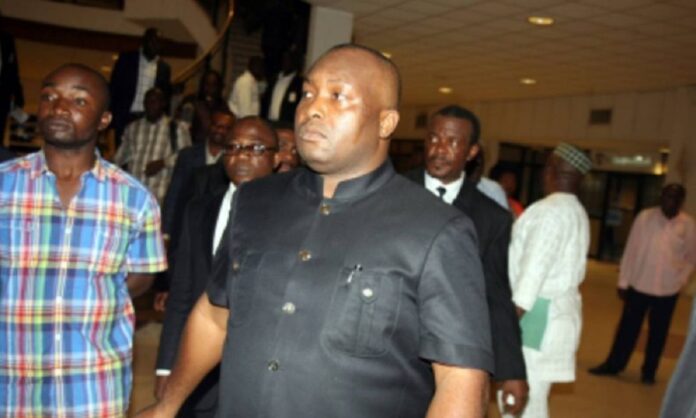 “I did not steal anything. Don’t involved me in your stuff. I am not a thief. You are looking for my attention with this your publication. It is a false publication. I have done many projects in Anambra and the people of Anambra know the truth. I don’t have to steal anybody’s project. I want you to remove that rubbish you published about me immediately” – exclaimed an inflamed Senator Ifeanyi Uba on the phone to the publisher of 247ureports.com over a publication by 247ureports.com citing a media consultant to the Federal ministry of works, Abuja, Ichie Daniel Ezeobi who released a press statement claiming the Senator representing the south senatorial district of Anambra State under the YPP platform – had laid claim over projects that was not his.

The press statement is reproduced below:

Federal Government Cautioned Ubah Over Stolen Projects; Warns Azubogwu, Ekwunife Others To Stop Playing Politics With Its Project In Anambra

In what could be described as incredible, unbearable and highly intransigent and preposterous, the federal government through the minister for works and housing, Babatunde Fashola has warned/cautioned the Senator representing Anambra south senatorial district, Dr. Ifeanyi Patrick Ubah to from henceforth stop his unhonest and uncultural attitude of glorifying major project done by the federal government to be his.

Fashola said this during a public hearing lecture organized by the federal ministry of works and housing in Wuse 2 where he observed that senators and house of representatives from PDP and YPP in Anambra state are busy taking credit for federal government-sponsored projects/programs in a bid to advance their governorship aspiration, an act which he described as criminal and unacceptable, unbelievable and cautioned that such attitude should stop with immediate effect.

Recall that in the recent time, most of these individual mentioned above have claimed to have been responsible for one or two projects in the state, but in reality, they were never in the picture as those projects were fully and comprehensively financed by the federal ministry of works and the  National Management Agency ( NEMA).

It is quite disheartening and discouraging that a senator who sold the empowerment opportunities meant for his senatorial district and used the fund for acclaimed Political aspiration could have the effrontery to lay claims on federal government-sponsored projects and programs in a state just for selfish governorship interest.

Senator Ifeanyi Uba is lining up to join the gubernatorial contest in Anambra for 2021 under the YPP platform. He hails from Nnewi in Nnewi North LGA – which is located within the southern senatorial district where the gubernatorial seat has been zoned.

Senator Uba also added he has done more philanthropic projects that anybody in Anambra State.