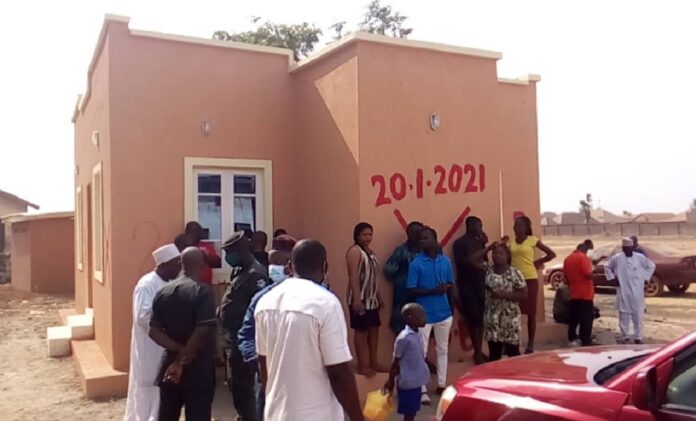 Following the red marking of a mosque situated at the Government Secondary School, Otukpo by the Benue State Urban Development Board on the 21/1/2021 and built by an old boy of the school, there has been speculations that Governor Samuel Ortom ordered for the demolition of the beautiful edifice meant for

Our correspondent who visited the site in Otukpo saw the alleged demolished mosque as reported in some segments of the media still standing.

While speaking to the school community consisting of Christians, Muslims, school management and neighbours, the General Manager and Chief Executive Officer of the State Urban Development Board, Apostle (Dr) Saint Gbilekaa Abrahams stated that the development of the mosque did not follow due process of building plans approval.

He told the school community that Governor Samuel Ortom is not against any faith but a governor who cares for all and has so directed that the building be converted to another use to avoid creating tensions and  agitations from other faith groups in the school.

The General Manager therefore implored developers to always come to the board for registration of intended or existing structures that do not have the board approval for fresh application or regularisation.

He also laid to rest the rumours that the governor directed for the demolition of the mosque.

‘You can see the mosque with your own  eyes still standing’, he said.

‘Building  of worship centres are not permitted in our public post primary institutions’, he added.

Also speaking, the award winning Chairman of Otukpo Local Government Area, Honourable George Alli stated that Governor Ortom is a listening leader who has requested that the structure in question should be handed over to the school acting principal by the Muslim community.

Alli further added that: ‘I am happy today because the General Manager of the Board is here to clear the air that I ordered for the demolition of this mosque’.

‘I also seek building plans approval from the Board as elucidated by the general manager’, he submitted.

Expressing appreciation, the Vice Principal Academics and Acting Principal of the school, Odeh Godwin Anyebe thanked the governor, the Executive Secretary of the Teaching Service Board, the General Manager, State Urban Development Board and Otukpo Chairman for averting a potential violent religious crisis.

Representatives of the Muslim community, Alhaji Salihu Musa and Alhaji Musa Muhammad expressed appreciation to Gov. Samuel Ortom, the general manager of Urban Development Board, Apostle (Dr)  Saint Gbilekaa Abrahams, Otukpo Local Government  Chairman, Hon. George Alli,  the Executive Secretary of the state teaching service board, Christian community and other stakeholders  for rallying round them in their trying  moments of losing an ancient prayer ground that has been turned into a beautiful edifice dedicated to the worship of Allah. They also pleaded with  Gov. Ortom, Commissioner for education, Prof. Dennis Ityavyar, the state government and ministry of education to restore the former principal, Mr.  Ameh Onah back to his office as the principal and rescind the decision of demoting him.