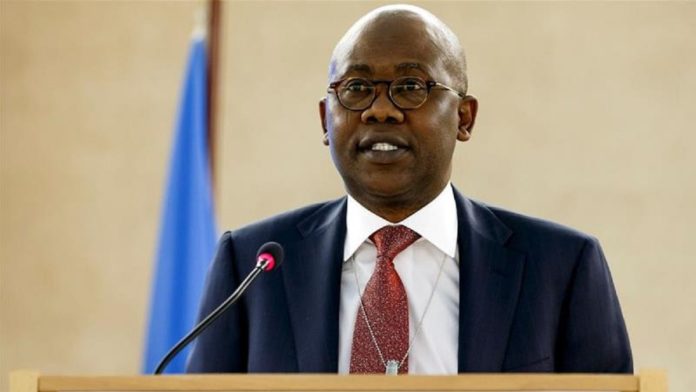 The Abuja Zonal Office of the Economic and Financial Crimes Commission, EFCC, on Tuesday, August 4, 2020 re-arraigned former Minister of Justice and Attorney General of the Federation, Mohamed Bello Adoke and Aliyu Abubakar before Justice I.E. Ekwo of the Federal High Court, Abuja, on a 14-count amended charge of money laundering to the tune of over Six Million United States Dollars ($6,000,000).

Count one of the new charges against Adoke read: “That you Mohammed Bello Adoke, sometime in September 2013, in Abuja, within the jurisdiction of this honourable court, made a cash payment of the sum of $2,267,400.00 (Two Million, Two Hundred and Sixty-Seven Thousand, Four Hundred United States Dollars) to one Rislaundeen Muhammed, and you thereby committed an offence contrary to the combined effects of Section 16(1) (d) and of Section 1(a) of the Money Laundering Prohibition Act 2011(as amended) and punishable under Section 16(2)(b) of the same Act.”

A new charge against Abubakar read. “That you Aliyu Abubakar, sometime in September 2013, in Abuja, within the jurisdiction of this honourable court, accepted a cash payment of the sum of $4,000,000.00 (Four Million United States Dollars) from Farmans Holdings Limited, through Abdulhakeem Uthman Mustapha, and you thereby committed an offence contrary to the combined effects of Section 16(1)(d) and of Section1(a) of the Money Laundering Prohibition Act 2011 (as amended) and punishable under Section 16(2)(b) of the same Act.”

Both defendants pleaded not guilty to all the charges, following which counsel to the second defendant, Akin Olujimi, SAN, made an oral application, challenging the jurisdiction of  the court to sit on the case while courts in the country are on vacation.

Justice Ekwo in response advised the counsel to make his application formal so that he could rule on it. While reminding Olujimi that he could exercise his discretion as it pleased him in his court, he warned that a consequence of his application may be the revocation of the bail of his client.

Olujimi,   for the interest of his client’s liberty, beat a hasty retreat and withdrew the oral application.