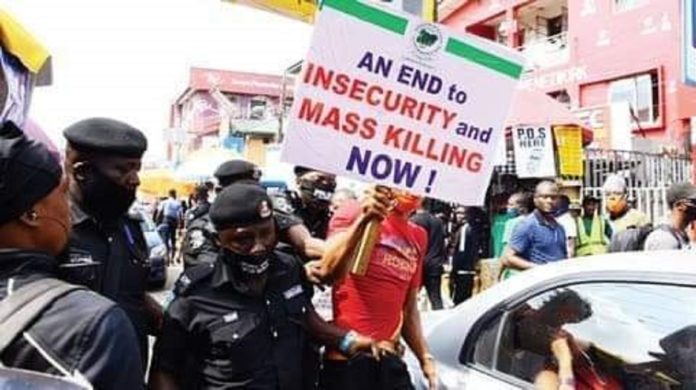 Conference of Nigeria Political Parties (CNPP) has condemned in strong terms the indiscriminate arrest of protesters in the country, urging all security agencies to stop militarising Nigerian youths.

The CNPP also called of President Muhammadu Buhari to call his security chiefs to order and end ceaseless killings in the country.

Reacting to reports of the arrest of several protesters in Kaduna State in a statement issued on Saturday by its Secretary General, Chief Willy Ezugwu, the CNPP wondered why “Policemen who have been in hiding since the ongoing massacre of citizens in Southern Kaduna have suddenly woken up from slumber to arrest defenceless youths asking them to do their constitutional job of protecting lives.

“At a time members of international community are raising red flags to their citizens not to travel to Nigeria, the police and other security agencies are busy arresting frustrated young people who are urging them to protect their lives and that of their parents.

“We call on President Muhammadu Buhari to call the Nation’s security chiefs to order and save the country from impending violence as these peaceful demonstrators could be forced to become confrontational, leading to a serious threat to law and order.

“Mr. President, it’s time to end the incessant killings in Southern Kaduna and other parts of the country and restore the confidence of Nigerians and the international community in the ability of Nigeria to take charge of her internal security.

“Nigerian security agencies should learn to be more civil and stop manhandling and militarisation defenceless young citizens for demanding good governance and responsible leadership. Enough of bloodshed”, the CNPP warned.