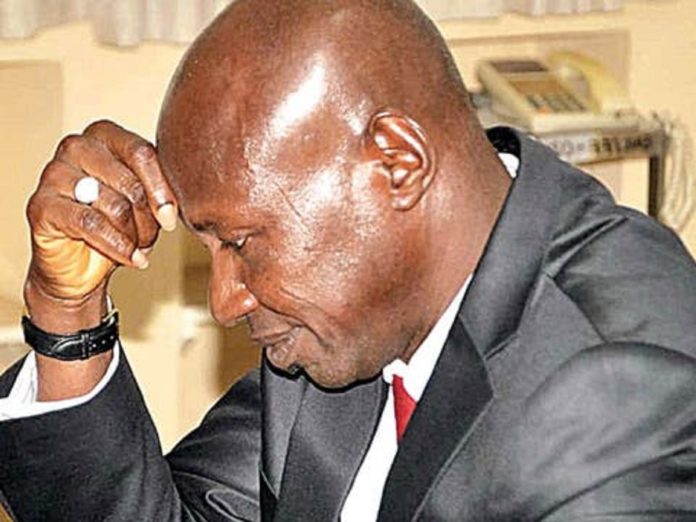 Lawyer to the suspended Acting Chairman of the Economic and Financial Crimes Commission (EFCC), Mr. Ibrahim Magu, on Friday pleaded with the Presidential Investigation Committee to grant him bail.

He said Magu needed the bail because the print and electronic media had taken undue advantage of his detention to launch a campaign of calumny against him.

He made six other demands including making the terms of reference of the committee available to Magu and giving him opportunity to know the allegations against him.

He said witnesses were being called and examined by the committee behind Magu’s back and at the same time disallowing him and his counsel from participating in the proceedings involving such witnesses.

Magu’s counsel, Mr. Wahab Shittu made the demands in a July 10, 2020 letter of plea to the panel.

He said: “We act as counsel of choice to Mr. Ibrahim Mustapha Magu, the Ag. Chairman of the EFCC hereinafter referred to as “our Client” and on whose behalf and specific instructions we write as follows:

“Our client has briefed and drawn our attention to the letter dated 6th of July, 2020 ref No. PIC/AR/VOL.1/01 wherein he was informed as follows:

“The above-mentioned panel is investigating above listed offences in which you feature prominently, and the need to obtain clarification from you has become necessary.

“You are therefore directed to with immediate effect accompany the Assistant Commissioner of Police ACP Gabriel Elaigwu and team to report to the Chairman and members of the Committee today 6th July 2020.

“Ensure compliance and receipt of my warmest regards please.”

Counsel said that Magu, on receiving the said letter “followed the ACP Gabriel Elaigwu and team to the Banquet Hall, State House Abuja and has since then been in custody and appearing before your esteemed Committee.”

Shittu said since his appearance before the panel, he had not been served petitions against him.

He added:” Mr. Chairman, since the 6th of July, 2020 when our Client honored your invitation, he has been consistently applying to the Committee to be given the petitions containing the allegations of Conspiracy, Corrupt Enrichment, Abuse of Office/Power which request has not been honored or obliged till date.

“Our client has also informed us that he remains unaware of the terms of reference of this distinguished Committee.

“Sir, our client has also drawn our attention to the following:

” That he has been in detention and kept at the Force Criminal Investigation Department (FCID) of the Nigerian Police Force, Area 10 Abuja since the 6th of July till date without being informed of the allegations leveled against him and the deserved opportunity to timeously study and respond to same.

“That witnesses are called and examined by the committee behind his back and without allowing him and Counsel of his choice to participate in the proceedings involving these witnesses.”

He said Magu was being maligned in the media including alleged keeping of secret accounts, acquisition of properties in Dubai and giving N4billion to Vice President Yemi Osinbajo.

He added: “That both print and electronic media have taken undue advantage of the detention of our client to launch a campaign of calumny against him spreading in the process consistently highly prejudicial, damaging and untrue allegations on a daily basis.

“These unfounded allegations which never featured in the proceedings of the committee thus far include the allegation that our client gave the Vice President, Pro. Yemi Osinbajo, SAN, GCON, the sum of N4billion and that our client maintains secret accounts, procured cronies to front for him and that he acquired properties in Dubai.

“These campaigns of calumny have greatly affected the moral of our client and damaged his hard-earned reputation and that of the Commission. That our Client as a result of this campaign of calumny has been paraded like a common criminal and subjected to all manner of insults and embarrassment just for serving his nation diligently and efficiently as the arrowhead of the anti-corruption agenda of this Administration.  “This unfortunate development happening before the determination of the petitions by Honourable Committee with prejudicial consequences.”

The counsel made seven demands from Salami panel.

He said: “In view of our observations above, may we humbly request from your Lordship, the Chairman of the Committee and other distinguished members:

iii)   That our client will appreciate the intervention of the Committee in ordering the release of our client from custody to enable him defend himself adequately and attend to his deteriorating health in custody.

vii)    That our client be guaranteed his right to fair hearing including his right to liberty in the course of the proceedings of this distinguished Committee.

“My Lord, the Chairman of the Committee and Honourable Members, our client will appreciate your taking timeous steps in addressing the fundamental concerns of our client raised in this letter.

“Whilst awaiting your urgent intervention on the issues raised herein please be assured my lord of our best wishes and professional regards.”

The counsel, Tosin Ojaomo from Ojaomo and Ojaomo Chambers said Magu was ready to provide a good surety.

He said the application was based on the IGP’s promise not to detain any Nigerian beyond 24 hours because of COVID-19 pandemic.

The letter was copied President Muhamnadu Buhari; the Chairman of the Presidential Investigation Committee;  the Chairman, Presidential Advisory Committe on Anti-Corruption (PACAC), Prof. Itse Sagay and the  Deputy Inspector-General of Police in Charge of Investigaton, FCID, Area 10

The July 10, 2020 letter reads: “We are solicitors to Ibrahim Magu, the acting Chairman of the Eonomic and Financial Crimes Commission and a Commissioner of Police who is currently under detention at your facility and whom we shall later refer to as our client. We humbly apply for his bail on self-recognizance.

“It is our client’s brief that he was invited by a team of security operatives with respect to an investigation into the activities of the Economic and Financial Crimes Commission under his leadership.

“Our client has consistently denied all allegations leveled against him by the Attorney General of the Federation and Minister of Justice and has provided both documentary and oral evidence to clear the air on all the allegations.

“Sir, our client has been in your detention facility since the 6th day of July, 2020 hoping to be granted an adminstrative bail by your office.

“Our decision to write this application to your office is premised in your declaration and avowed commitment at your inauguration as the Inspector-General of Police to ensure that the constitutional rights of all Nigerians is protected under your leadership.

“This has been severally demonstrated by your recent directives to all police formations in Nigeria not to detain any suspect for any offence which is bailable in nature due to the Covid-19 pandemic that is ravaging the world which Nigeria is not an exemption.

“In view of the bailable nature of the allegations leveled against our client, we hereby apply that you grant him an administrative bail pending the completion of the investigation for the defence of these allegations in accordance with the relevant provision of the constitution.

“Finally, if our application for bail on self-recognizance is not acceptable, we are ready to provide a credible surety that will ensure the availability of our client anytime he is needed for the purpose of this investigation.

“We thank you for the anticipated grant of this germane application in the interest of justice and fairness.”

About 21 policemen attached to Magu were on Friday withdrawn, moments after President Muhammadu Buhari approved his suspension from duties and  approved Mohammed Umar  as replacement.

Also retrieved from Magu were all official vehicles. Late on Friday, the Inspector General of Police (IG) Mohammed Adamu directed the immediate withdrawal of all police operatives serving in  the EFCC.

The directive which was contained in a signal to the Assistant Inspector General (AIG), Police Mobile Force (PMF), PMF Squadrons one to 79, Force Secretary and Commissioners of Police of all the state commands and the Federal Capital Territory (FCT) also directed that the exact number withdrawn be replaced with new operatives.

According to the order, only staff of EFCC should be allowed access into the premises, while withdrawn police personnel from PMF 21, 44, 45, 46 and 50 must report to the Force Headquarters by 8am on Monday.

But it could not be immediately confirmed whether Magu and his family would be evicted from his  official quarters in the highbrow Maitama District,Abuja.

There were indications last night that Magu might face fresh hurdles following submission of more petitions against him to   the Presidential Investigation Committee headed by Justice Isa Ayo Salami (Rtd).

Magu’s lawyers are of the opinion that the fresh petitions are not part of the 22 allegations which the Attorney-General of the Federation and Minister of Justice, Mr. Abubakar Malami (SAN) originally filed against him.

Investigation by our correspondent revealed that Magu’s escort vehicles and policemen were recalled at the Banquet Hall of the Presidential Villa when he appeared before the  panel.

“All the 21 policemen, including escorts, attached to Magu were withdrawn at about 4.30pm,” a well- placed source said.

“The official vehicles were recalled from the Villa to the pool  on the spot.

“Although we are awaiting signal we have been told that about 200 policemen in Abuja and Lagos offices have been directed to go back to their various formations.”

A source said “redeployment, swapping and restructuring are  statutory whenever there is a change of guards.”

“Since Magu is on suspension, there are limited perks of office he can enjoy. He knows better as a Commissioner of Police.

“There is a new Acting Chairman of EFCC, Mr. Mohammed Umar. And it is the responsibility of the police and other security agencies to provide full security apparatchik for the new helmsman.

“Besides, Umar needs a new team of officers to work with to avoid a case of double loyalty.”

Sources also said more petitions against Magu had been forwarded  to the Salami panel.

Magu’s lawyers said the petitions fell outside the presidential mandate of the panel.

It could not be immediately confirmed whether the petitions would be referred to the Force Criminal Investigation Department (FCID) by the panel.

One of the lawyers said: “Why is it that nobody is asking for the propriety of the panel sitting without disclosing how many petitions are before it.

“We just gathered that there are other petitions apart from Malami’s allegations. The panel must disclose these issues in order to ensure fairness and justice.”