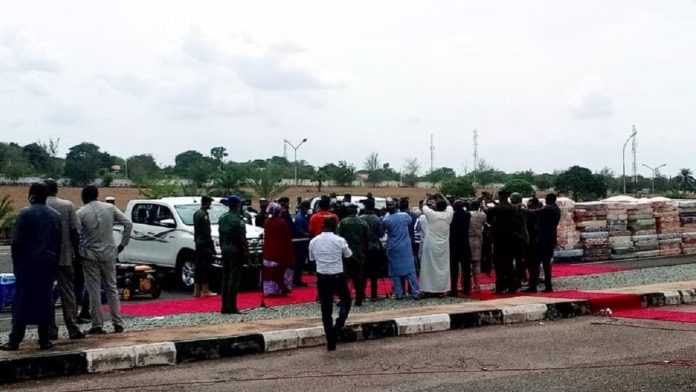 Governor Abdullahi Sule of Nasarawa State in a bid to combat crimes and criminality in the State has donated three brand new hilux van to support the Nigeria Army in fight men of the under world.

The State Governor gave the hint while donating three Hilux can, fifteen motorcycles, ten cellphones and 100 mattresses to Army of the 177 Battalion Barrack,Keffi.

The executive Governor explained that the donation would stem the tide of combating crime in the State.

He in addition maintained that the Government of Nasarawa has confidence on the Nigeria Army especially those at the crisis prone areas of Toto,Nasarawa,Keana and Doma.

Governor Sule lauded the Council Chairmen of Toto and Nasarawa Local Government for their holistic measure in curbing crime which he said include kidnapping.

He promised to support the army at all times in the discharge of their duty.

The officer commanding 177 Barracks, Lt Col. Aliyu thanked the State Government for assisting them in the discharge of their duty.

“Though we lost our men in the fight but this will not deter us from discharging our duty effectively”.