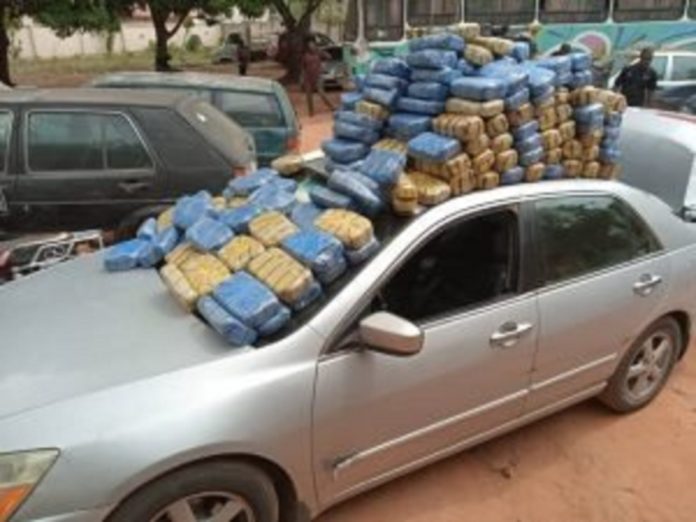 The Edo Command of the National Drug Law Enforcement Agency (NDLEA) on Tuesday impounded six vehicles, containing about 1,687kg of substances suspected to be cannabis sativa.

Addressing newsmen in Benin, the Commander of the agency in Edo, Mr Buba Wakawa, put the value of the substances at about N25 million.

He said that sustained monitoring by the agency’s operatives led to bursting of the syndicate trafficking the hard drugs.

“This is the first time that six vehicles will be impounded in a single swift action by the command.

“Preliminary investigation revealed that the cartel targeted the emergency created by the Coronavirus pandemic for massive shipment of drugs but the command swiftly nipped their nefarious plan in the bud.”

Wakawa put the value of the impounded vehicles to about N10 million, bringing the total losses suffered by the drug peddlers to N35 million.

“The operation, which was carried out by the Auchi Area Command of the agency, based on intelligence gathering, took place at Agenebode in the Etsako East Local Government Area of the state.

“It is one of the most successful operations executed by the state command since January.

“All six vehicles had a full shipment of cannabis set for distribution to other states of the federation.”

He said that Edo was notorious for cultivation of cannabis.

“Therefore, as drug control managers, we have adopted both primary and secondary strategies to check this criminal act.

“We do this by tracing and destroying cannabis farms as well as intercepting harvested and processed cannabis before it gets to the final consumers.”

Citing Section 32, sub-section (C) of the NDLEA Act, Wakawa said that that: “All instrumentality of conveyance, including aircraft, vehicles or vessels which are used to facilitate the transportation, sale, receipt, possession or concealment of substances shall be forfeited.

Wakawa disclosed, however, that the drivers of the impounded vehicles escaped arrest.

“Meanwhile, intensive efforts by the command are underway to apprehend members of the cartel and bring them to book.”

Wakawa appealed to Gov. Godwin Obaseki of Edo to assist the command with utility vehicles to boost the agency’s operations in the state.