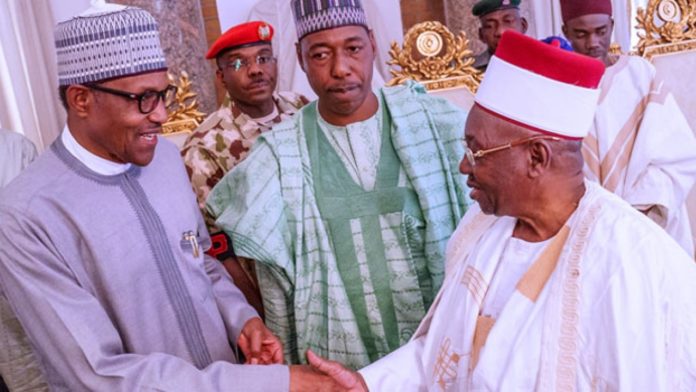 Mr. Babagana Zulum, the Borno state governor has charged the federal government and military to change tactics in the fight against Boko Haram and take the war to Boko Haram hiding places.

Zulum made this known while speaking at the Shehu of Borno’s palace in Maiduguri when Muhammadu Buhari visited on Wednesday to condole with the state and families of those killed on Sunday by the Boko Haram insurgents.

“We are calling upon the Nigerian military to change strategies and we can borrow a leaf from the success our military was able to hugely record in the years 2016 and 2017 to end the insurgency”.

We need to keep taking the war to enclaves of the insurgents in the fringes of the Lake Chad, in Sambisa forest and some notable areas” Zulum said.

Buhari used the visit to reiterated his commitment to ending the insurgency, fighting corruption and leading the country to economic recovery.

The President called on the people of Borno to continue cooperation with the military.