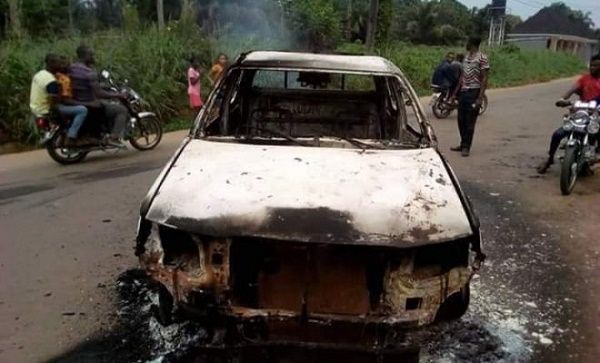 The Indigenous People’s Of Biafra(IPOB) has disclosed that no fewer than ten of her members were missing and have not been seen since the recent Oraifite, Ekwusigo Council area face off with the police and soldiers.

This was contained in a press statement issued by the group’s spokesman, Comrade Emma Powerful in Awka this morning.

“More than 10 people are missing which we considered dead but we can lay hands on 2 persons that are now in the mortuary. Fifteen (15) people sustained bullets wounds including Ifeanyi Ejiofor’s mother. They are undergoing medical treatment now and we are looking combing everywhere to locate those who were presumably taken away by the Nigeria Police and Army, for their dead bodies…”, Powerful stated.

He said they were still studying the situation to ascertain the actual number of those abducted and those being detained by the security agencies in the wake of the face off.

However, it was a common knowledge within and around the sleepy rural Oraifite community that the crisis which got to a boiling point on Monday, Dec 2,2019 had been simmering for more than three months before it boiling over.

More so, that outside intentional ignorance, naivety or official cover-up the matter was not particularly a police, army and or the IPOB matter per se. But was alleged to be a sort of misplaced aggression and raw show of strength by security agencies. Unfortunately it snowballed into a cataclysmic volcano of violence which was quickly contained reasonably by the managerial dexterity of the Anambra police chief -John Bassey Abang. Else it would have consumed more lives and property or even linger beyond imagination.

However, due to the prevailing tense atmosphere and the heavy presence of soldiers, police and undercover security officers that have literally taken over the community, everywhere is deserted, attempts to speak to anyone has been difficult. Army officers were everywhere and frisk one at every turn.

Most young men and women traced to nearby communities of Oba, Ozubulu, Ihiala, Nnewi and Onitsha claimed they ran out of Oraifite to avoid being arrested and “unnecessary harassment by security agents who have now taken over our community.”

According to them, the crisis has nothing to do with IPOB. Police and soldiers who have been feeding fat on us just wanted to show off their strength to their big boss and multi-billionaire son of the soil, -Emeka. So the gra gra went beyond control as the youth who had been bearing the brunt of their malicious brutality all along reacted to put a stop at it. That was how the crisis became a national issue.

The torching of Barrister Ifeanyi Ejiofor’s home was clearly the height of the provocation which ignited the anger of the youths who consequently then threw caution to the wind in defense of their community. They had reasoned that one would only die once, and that by the time the dust settles, everyone including the multi-billionaire would have learnt an unforgettable lesson.

That there was an age long annual masquerade festival in the community but had in this year’s edition due to some irreconcilable differences broken into two parallel factions. They equally took up two distinct names and had operated in that format until security issues started springing up. They then reportedly started trading accusations on each other of being behind vices within the area. Consequently the two camps alleged to be holding allegiance to the multibillionnare and Ejiofor became mortal enemies until, according to one school of thought, it boiled over and the crisis erupted openly.

Another angle had it that as the counsel to IPOB whose leader Nnamdi Kanu lost his mother few weeks ago, series of meeting were being held in preparation for the burial and the anticipated arrival of Kanu.

That consequent upon the meetings, the Oraifite Police Area Commander invited Ejiofor for a routine meeting and apparently to know details of their meetings. But Ejiofor had not honoured the invitation till the crisis. That since Ejiofor was neck deep in the preparation of his late elder brother (a reverend) he was unable to honour the police summon at once as expected. So, perhaps the police chief chose to go to him, on the day of the burial as it was almost certain that Ejiofor would be there. That the heavy number of officers who accompanied the Area Commander incensed the IPOB members who were reportedly in their numbers at the burial. They were also said to be in charge of activities including security at the burial ceremony.

This led to argument and tempers flared and resulted in the crisis.

Another school of thought disclosed that some officers on special escort duty had accompanied some named big men to the burial and there was an altercation between the officers and some operatives of the IPOB which went beyond control. That the crisis was ignited by a senior officer who ordered the hitherto peaceful IPOB operatives to leave their vicinity. The IPOB did not respond and the officer threatened to deal with them forthwith.

That beyond reasonable expectation, the officer quickly grabbed a weapon from one of his escorts and rained bullets on the IPOB boys. Surprisingly none of the bullets penetrated their bodies. That on realizing this, he chose to empty the entire magazine. So when the bullets got exhausted without achieving his aim, the boys then turned against him.

That since they were unarmed, they chose all manner of clubs of wood with which they knocked him down. And all men in uniform were chased after and physical subdued.

It was in the process that a call for reinforcement was called for from Awka headquarters, the Area Command and the 302 military cantonment, Onitsha. But before the reinforcement could come, two officers had been knocked down and set ablaze. It was at that point that Ejiofor’s home was set on fire and some of the people who were at the burial were arrested or killed.