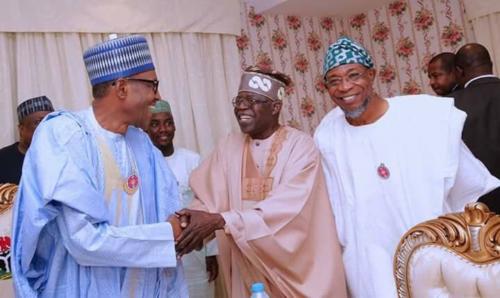 A chieftain of the All Progressives Congress (APC) in Oyo state, Asiwaju Rotimi Ajanaku  Sunday disclosed that the party national leader and former governor of Lagos state, Asiwaju Bola Ahmed Tinubu, is a key factor in the actualisation South West presidential agenda in the 2023 general elections.

According to Asiwaju Ajanaku, in a statement he personally signed in Ibadan, and made available by his media aide, Prince Adebowale Adeoye, the APC national leader is the arrowhead of Yoruba presidential aspiration.

The APC chieftain said Asiwaju Tinubu stands out “as an indispensable catalyst to the actualization of Yoruba agenda in 2023 and beyond.”

“As Asiwaju Odo Oodua (Oodua Youths Leader), it becomes imperative that I speak on issues affecting South West states and Oodua agenda ahead of 2023 as well as unwarranted discussion on Tinubu’s presidential ambition, subsequent attacks on his person by some uninformed people and those planted by antagonists to draw the progress and advancement of Southwest region backward”, he said.

“We are going through in their states. Can anyone tell me the essence of teaming up against Tinubu when no one has actually established any of the baseless allegations raised by his accusers? Having cold-bloodedness against Tinubu especially now when Yoruba ought to work together in realization of its projection in 2023 is unwarranted and against the spirit of our ancestors.

“Should we allow few politicians to deprive Yorubas of our right just because of differences or rancour between them and Tinubu? How sure are we that it is not a case of rivalry, or jealousy? I am not against the idea of criticizing Tinubu, but there is need to make whatever criticism they like to engage in to be constructive

“We shouldn’t tolerate baseless and damaging criticism at this time. Whether we say Yoruba agenda or Yoruba nation, speaking on political issues in Nigeria today, Tinubu is a generalissimo in the Southwest. So a personality who is that relevant should be protected from political termites”.

According to him, some Tinubu’s accusers are not legitimate Oduduwans, but are planted to destroy Oduduwa structure, adding these were envious of his achievements and his political strength.

“Bola Ahmed Tinubu is a political philosopher, he knows what he wants, how to get it. He picks best brain from every family or community in Yorubaland and beyond, put them on queue for grooming, uses his machinery to get them to enviable positions in Nigeria.

“He believes it’s a cycle that must continue to go round, but unfortunately after assuming exalted positions, some of the so called his boys or political sons believed they have what it takes to tackle him in order to plant their successor, the idea is to break the circle and deprive some families that are on the queue right to benefit from the ‘cycle of progress”.

On the need for traditional rulers especially in the South West to be neutral in Nigeria politics, Asiwaju Ajanaku said “as custodians of culture, moral values and belief, Yoruba Obas should be upright in the protection, defense and promotion of Oduduwa territory and inhabitants. “