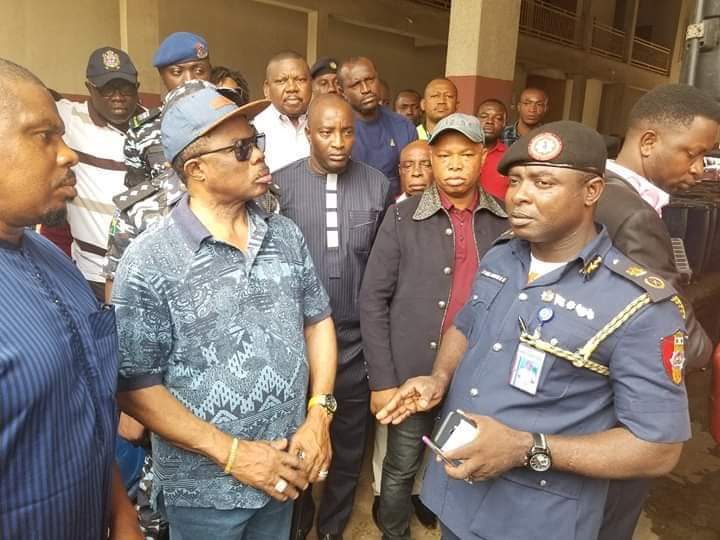 sets up appeal fund for victims

Announcing his removal and other sweeping changes and restructuring within the Fire department, the state Commissioner for Information and Public Enlightenment, Chief C-Don Adinuba said that Air Vice Marshal Ben Chiobi has been appointed as the new boss of the agency.

The announcement designated the new fire chief as the Managing Director and Chief Executive Officer of the new autonomous Fire department.

Chiobi, according to Adinuba is currently the Special Adviser to the Governor on Creative Security as well as Coordinator of the Anambra State Integrated Security System.

Adinuba disclosed that the new structures were consequent upon moves already initiated by Gov Willie Obiano to grant the State Fire Service greater autonomy in its operations and management, subject to approval by the Anambra State House of Assembly.

He pointed out that the law setting up the state Fire Service would be amended in order to make it independent of the state Ministry of Public Utilities or any other ministry.

The autonomy, he added would free it from present unnecessary bureaucratic encumbrances and enable it respond more effectively and efficiently to the challenges of its mandate.

The Information and Public Enlightenment also announced the willingness of the State government to receive donations and assistance from the public in aid of the various fire victims.

He declared, “Gov Willie Obiano has, therefore, opened a bank account to assist the fire victims. It is known as the Anambra State Victims Support Account. The account number is 5030105029, Fidelity Bank PLC.

“It is to be administered by the distinguished sons and daughters of our state who serve as trustees of the Anambra State Security Trust Fund led by Chief Chidi Anyaegbu, MFR, Chairman of Chisco Group.

“All Anambra indigenes, friends, in laws and well wishers are encouraged to give generously to our brothers and sisters who are now all of a sudden in dire need of assistance. Let us  demonstrate, once more, our famed abundance of humanism.”

Earlier, following the open lapses on the part of the Anambra State Fire Department Headquarters that was for the upteenth time caught flat footed when a petrol tanker exploded at the Upper Iweka area of Onitsha, the South Eastern commercial hub, the state governor Willie Obiano has paid a surprise visit to the Chief Fire Officer, Mr Martin Agbili.

According to report from the Government House, the visit was part of the governor’s efforts to ascertain why the Onitsha fire as was the case in some recent incidences couldn’t be quelled.

Gov Obiano was said to have promised sweeping reengineering, training-retraining and equipping of the department to help sharpen their skills and responsiveness.

This was coming on the heels of messages of heartfelt sympathy to the state and victims of the Onitsha tanker fire explosion of Wednesday, Oct 16,2019 from prominent citizens of the state including an All Progressives Grand Alliance chieftain for the Njikoka/Anaocha/Dunukofia Federal Constituency, Chief Dozie Nwankwo and the Director General of the National Inland Water Ways, Chief George Moghalu.

Nwankwo who is currently out of the country while commiserating with the victims noted his shock and deep sympathy for those who lost loved ones, means of livelihood, money, valuable documents, wares, shops, buildings, cars and other resources in the multiple fire accidents.

He appealed to the Federal government to assist the Anambra state government in ameliorating their plight. He urged them to take solace in God, pointing out that once there’s life, there’s hope for greater tomorrow.

Chief Moghalu in his message to the victims said that he was worried about the unfortunate events that caused extensive human and material losses to struggling and enterprising citizens. He prayed Almighty God to console and lift them up again soon. He appealed to public spirited citizens to rise up to the occasion and assist them through donations.

Gov Obiano was received on arrival at the Fire Services Headquarters overlooking the Enugu-Onitsha dual carriage way by the Director of Fire Service in the State, Mr Martin Agbili, alongside the state Commissioner for Public Utilities, Engr Emeka Ezenwanne.

The Fire Chief who briefed and fielded questions from the governor took him and his team round the premises to see some of their equipment. He explained that his men couldn’t arrive the scene of the Wednesday fire incident at Onitsha on time because of a little failure. Also that the closest fire fighters who would have made it to the scene from the Onitsha Main Market unit, were unfortunately on duty fighting fire elsewhere.

Mr Agbili disclosed that even when the fire fighters eventually got to the scene, the crowd initially chased them, and that his men managed to escape the scene.

Also the Anambra state chapter of the Christian Council of Nigeria has described the Wednesday 16th October, 2019 at Onitsha as a “monumental loss to the Igbo people and the nation”.

In a press statement from the Council and signed by its chairman and Bishop of the Niger Diocese, Rev Dr Owen Nwokolo, “…we sympathize with the families of those who lost their loved ones and properties.

“It is quite painful and heart breaking that in a time like this, when the economy of the nation is in quagmire that such economic loss will happen. However, we trust God our great comforter to console those who are in severe pain in a time like this. May He console all in Jesus name.

“More so, the subsequent fuel tanker fire outbreak around Omagba express way on Thursday 17the October, is condemnable and we console with those lost their properties as a result of the fire.

“We call on State government and government agencies to rise up to forestall such occurrence in the future by making sure that proper measures are put in place”.

The council also called on the Federal/state governments and other public spirited individuals to rise and support those who are in great pains as a result of the losses they encountered due to the fire.