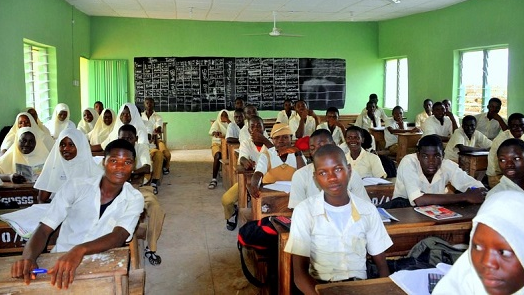 The programme was part of Ganduje’s free and compulsory basic and Secondary education policy.

The distribution of the school uniforms and instructional materials were done simultaneously across the 44 Local Government Areas of the state.

He  stated that distribution of the school uniforms and other instructional materials such as books was informed by his desire to ensure that every child in Kano receive basic education free-of-charge.

According to him, , in Kumbotso Local Government Area alone, 29,480 sets of new school uniform were distributed to primary 1 pupils across 78 primary schools in the area.
He added that, 500 Work Books, 500 Hausa text books and 50 flash card packages were also distributed at the event.

Ganduje added that in line with the free and compulsory basic and secondary school education, Kano state government  has commenced direct funding of primary and secondary schools numbering 1180 with a total students population of 834, 366 at a total cost of about N200 million per month or N2.4 billion per annum.

He added that, “similarly, government has provided school uniforms to 779, 522 newly enrolled pupils (boys and girls) at the total cost of N381 million.

Also, speaking, the Permanent Secretary, Kano state Ministry of Education, Hajiya Lauratu Afo Diso commended Ganduje for the giant strides of his adminstration in the education sector, particularly the free and compulsory basic and Secondary school education policy which she said has gone a long way to encouraging parents to enroll their wards into schools.

In his address, the chairman of the state Universal Basic Education Board, Dr. Danlamin  Haiya noted that Ganduje’s administration has invested heavily in the education sector.

According to him, the state government under Ganduje’s adminstration has set aside N3 billion for construction of over 286 additional class room blocks, while 264 additional primary schools would be constructed across the state so as to provide conducive learning environment for new intakes.

The chairman of Kumbotso Local Government  Area, Kabiru Ado Panshekara expressed happiness over Ganduje’s policy on free and compulsory basic and Secondary school education, and promised to use his office to ensure that the programme becomes a success, as he vowed to embark on massive enlightenment programme to encourage parents enroll their wards in schools.