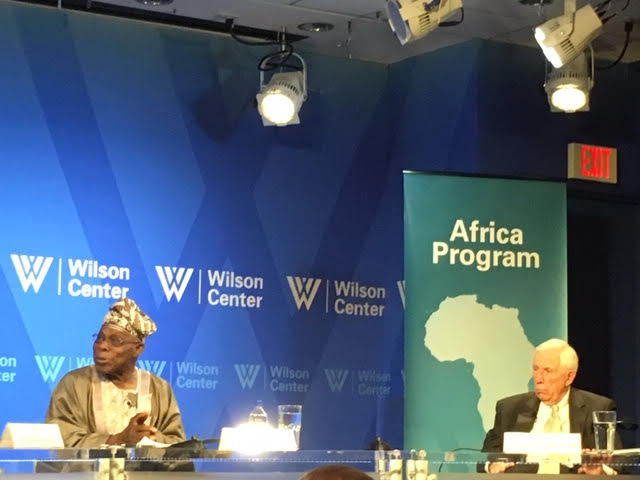 Ex-Nigerian President Denies Receiving US intel on Nigerians in AlQaeda

Washington – Nigeria’s former president, Gen Olusegun Obasanjo dropped a bombshell in Washington when he said that during his tenure, he never received intelligence reports from the US about the discovery of Nigerians in Al Alqaeda Terrorist Group.

Gen Obasanjo was responding to a question from US-based international human rights lawyer Emmanuel Ogebe after he spoke at the President Woodrow Wilson Center on Managing Nigeria’s Diversity Amidst Rising Ethno-religious Tensions.

Ogebe while welcoming President Obasanjo to Washington the way President Obasanjo had welcomed him to Nigeria as Country Representative of the ADF, asked Obasanjo if he had received intelligence reports from the US that when they invaded Afghanistan, they found amongst the foreign fighters, alongside Alqaeda Leader Bin Laden, several Nigerian citizens.

General Obasanjo who was visibly surprised by the question asked Barrister Ogebe for clarification.

Thereupon the esteemed International Statesmen said that he never received any such intelligence about Afghanistan but that he knew Nigerians were massively recruited in Libya and other countries as well.

Obasanjo also lamented that Libya is now practically a failed state and “will be a problem to all of us.”

Ogebe had testified before the US Congress that after the invasion of Afghanistan Nigerians were captured by US troops amongst Alqaeda’s foreign terrorists. However they were not amongst those extradited to Guantanamo Bay prison leading to strong suspicion that they returned to Nigeria and engendered Boko Haram terrorism.

Obasanjo said that “since independence Nigeria has not been as divided as today not even the civil war – due to mismanagement of diversity and poor leadership.”

Obasanjo said those to save Nigeria were Nigerians and thanked those in Diaspora for propagating change. “If you standby you’re an accomplice to evil.”

OBJ endorsed the call by fellow panelist Former US Congressman Frank Wolf for US Special Envoy on Nigeria/ Lake Chad.

“Maybe Nigeria would not be there today if I had rolled out tanks as I was petitioned to do over the sharia issue.

I called the Gov of Katsina about the woman to be stoned to death for adultery. He said I should leave it to him. Her death sentence was appealed and it never happened.”

Ogebe also asked the renowned former Nigerian Leader about his role in negotiating with Boko Haram.

Obasanjo said that when he first inquired from his intermediaries about Boko Haram’s external support in 2011, he was informed that it was just about 10-15% as much of their funding was local then.

However upon recent inquiry, Gen Obasanjo said he was told external support for Boko Haram is now 50%.

The ex-President also called for US sanctions on those who mismanage Africa’s diversity and elections which he identified as two of the top three African leadership challenges.