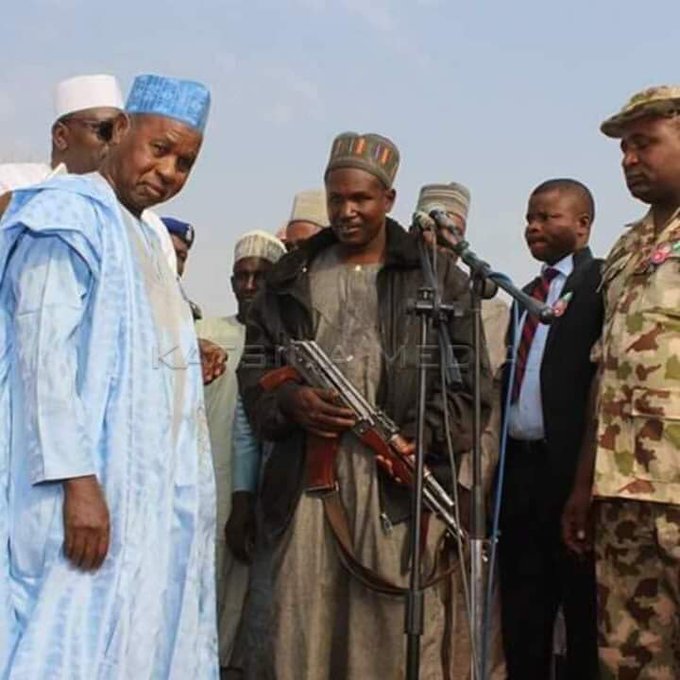 So if I want the governor of Zamfara, Katsina or Kaduna, or the president of Nigeria to come to my house, all I need to do is kill some hundreds of innocent Nigerians and then they will come to my abode to offer me cash and land.

In Nigeria justice is on its head. Commonsense has been murdered and responsibility decapitated.

In the same country, peaceful protest is met with the harshest hand of the inSecurity services. Youth are banned from peaceful protest and arrested even before they begin. Unarmed peaceful protesters demanding justice and betterment for the people are attacked by state inSecurity forces with deadly and excessive force, massacred, tossed into police vehicles and buried in bulk in mass graves.

What is Katsina governor Masari going to tell these terrorists? These armed and violent cattle rustlers and Fulani-linked terrorists make a killing from their acts of violent terror. Is the governor going to kneel down and beg them to abandon their love of money and demand for the land of the people? Obviously not. He is going to offer them more money than the billions they make from terror and offer them land and resources of the people they steal from as incentive to stop kidnapping and killing innocent Nigerians.

Zamfara governor likewise forgave terrorists who admitted to killing 50 innocent Nigerians per Fulani killed. These murderers from the pits of hell now walk our streets confidently if they have not taken the money and returned to what they know best.

“Give up your ancestral land for cattle ranches or be buried underneath it,” president Muhammadu Buhari said via his spokesman Femi Adesina. Watch again here: https://www.youtube.com/watch?v=zvK_POZz8NA

Perhaps the first time we heard of this crazy behavior was when the governor of Kaduna, Nasir el-Rufai admitted to sending emissaries even outside Nigeria’s borders to negotiate with Fulani terrorists with the message, “I am one of you so accept my entreaties.” El-Rufai further confessed to paying the terrorists:  “There are one or two that asked for monetary compensation. They said they have forgiven the death of human beings, but want compensation for cattle. We said no problem, and we paid some.” (https://punchng.com/el-rufai-kaduna-killings/) Yes, Nigeria’s rulers even reward terrorists abroad, not just within our borders.

Boko Haram terrorists continue to be paid billions and freed by the federal government in an unconstitutional amnesty program which did not go through the Council of state as demanded by law to legitimize any such pardon. The federal government even loves these terrorists so much that it told them “someday you – Boko Haram – can become the president’s of Nigeria.” (Watch them say this: https://www.youtube.com/watch?v=iWHx6zodyDc) The insanity of it. This is Nigeria.

We will sit in restaurants with the same violent terrorists who killed our loved ones, freely and confidently spending the millions they stole from us and the other billions the government rewarded them with. Free men, tomorrow’s presidents. All is lost. There is nothing more to say.

Nigeria is under the rule of terror!