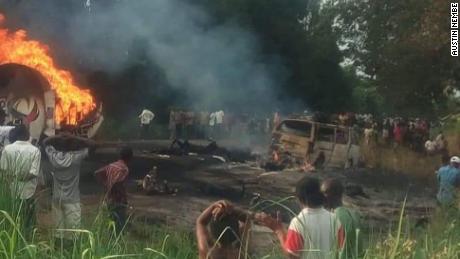 Eleven more person have died as a result of severe burns from the Fuel Tanker Explosion that took place at Ahumbe in Gwer East Local  Government Area of Benue State, two weeks ago.

The FRSC Sector Commander in Benue State, Aliyu Baba disclosed this when he paid a courtesy call on Governor Samuel Ortom at Government House Makurdi, in Thursday.

Aliyu Baba said the additional deaths has now taken the toll from the tanker inferno to 60.

He told the Govetnor that the commission needed additional operation ambulances to convey accident victims to hospitals explaining that most at times, the commission resort to using open pick up vans, which are not healthy, to convey persons who suffer injuries in accidents.

He further intimated that the commission will soon begin clamp down on Motorcycle riders who have no license and number plates in Benue.

“We are planning to begin a Nationwide clamp down on motorcycle riders who have no drivers license and plate numbers. The operation is scheduled to begin next month (August), and license will be N3500 only,” he said.

Responding, Governor Ortom called for support to the road safety to enable them carry out their duty.

He said the work of the commission required the support of individuals, organisations and government adding that anyone could be a victim of accident.

The governor said he will give full support to clampdown on the motorcycle riders operating without being registered saying most crimes in the state were  perpetrated by those using motorcycle especially that it is easier to use it through narrow roads.

Ortom promised to place order for an ambulance as a priority saying it would enable the commission performance their duties effectively.