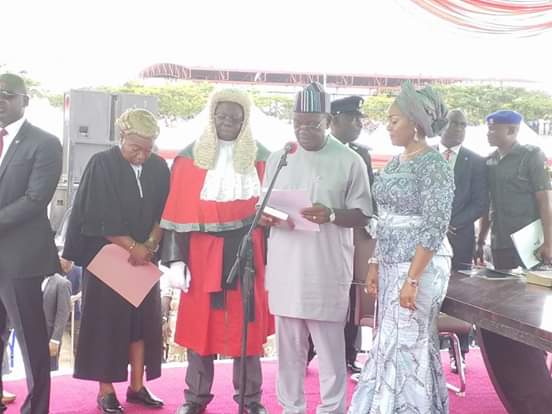 Governor Samuel Ortom and his deputy, Benson Abounu were today, sworn into office for a second term by the Chief Judge of Benue State,  Hon. Justice Aondaver Kaka’an.

Speaking at the Ibrahim Badamosi Babangida, (IBB) Square in Makurdi, venue for his inauguration, Governor Samuel Ortom vowed to willingly oppose any aggression strategically directed at  Benue land and her people.

Ortom who expressed deep love for the people thanked them for the overwhelming support given to him and his Deputy, Engr. Benson Abounu at the last general elections.

“You have loudly spoken with your votes and Nigeria and all of us have heard that you love me. It is my turn now to reciprocate the love by my action and activities.

“I love the Benue people. I appreciate the potentials of the people of the Benue valley.  For that reason, I do willingly oppose any aggression strategically directed at you and our fertile land,” Ortom said.

He said his first tenure was faced with several challenges ranging from dwindling cash from federal allocation,   insecurity among others saying despite the challenges, he recorded tremendous achievements in education, health, agriculture among others. 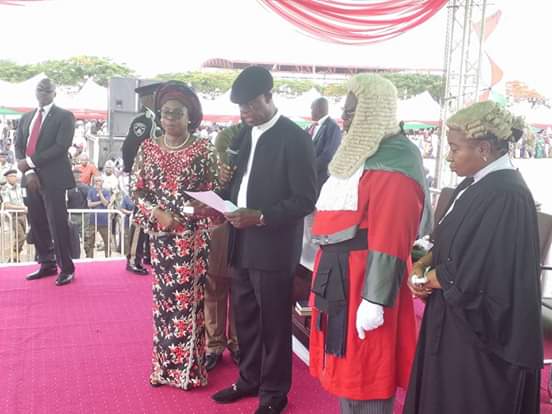 He called on all those who contested with him in the just concluded General Elections and other political leaders across the divides to join hom so that together, they can move this state forward.

“I will respect the Oath of office and by the Grace of God I will serve Benue people with all my heart. I know that my second tenure in office will be greater than the first because the end of a thing is greater than its beginning.  I am convinced that with God, We are able to go up and take Benue state.

The Chairman of PDP Chairman of PDP in Benue, Chief John Ngbede congratulated Orton on his inauguration saying the party will continue to cooperate and work with him to develop the state.

The Senators elect for Ben he North East, Dr. Gabriel Suswam also congratulated Governor Ortom and the entire people of Benue on the well fought election and victory at the polls.

Suswam who said Ortom deserved a second term having put his life on the line to save the state said “We as Benue people want to live a peaceful life and in unity with other tribes but we insist that other Nigerians must respect us as a people.