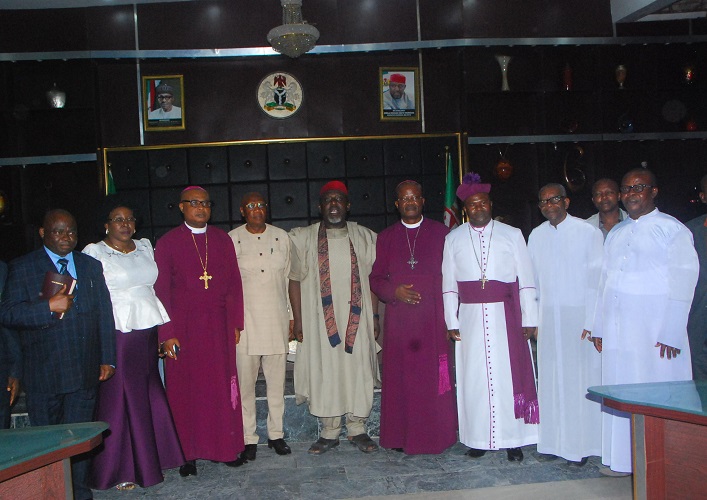 -As Government Signs Agreements With Them

-Says, PPP Arrangement Is The Best For Government’s Establishments & Institutions.

Governor Rochas Okorocha has said that for government’s establishments and Institutions to thrive, the Public Private Partnership (PPP) arrangement should be adopted or employed regretting that most people see government’s property as no-man’s property.

The governor spoke while handing over eight of the newly built Hospitals by his administration to Churches and Institutions, when the agreement to that effect was signed on Monday, May 20, 2019 at the Sam Mbakwe EXCO Chamber, Government House Owerri, with four other Hospitals also donated to the Army, Navy, Airforce and Police.

The government has built twenty-one, 200-bed Hospitals with one each in the twenty-seven local governments of the State and 1000-bed Somto Hospital another 1000-bed Mother and Child Hospital and Ochie Dike Diagnostic Hospital making it a total of 30 Hospitals.

The Anglican Diocese of Owerri took the Hospital at Ogwa in Mbaitoli LGA, the Lord Chosen Church headed by Pastor Lazarus Muoka took the one at Ohaji/Egbema local government, while the Anglican Diocese of Mbano and that of Okigwe South took those of Isiala Mbano and Okigwe LGAs respectively. They would manage the Hospitals for twenty-five years and only pay the State Government One Hundred Thousand Naira (N100,000)only, monthly.

The general hospital at Isu LGA was leased to the Claritian University as teaching Hospital, for ninety-nine years with the Imo State Government having ten percent investment. The Orlu United Medical team took the Orlu general Hospital and would also manage it for 25years and to be paying N100,000 monthly to the government.

His words, “We are here to expand the scope of our government by bringing in Private Participation in running the affairs of government. We in Rescue Mission Government believe that government cannot do all things alone. But in partnership with organizations. We conceptualized this idea of PPP in Imo State 5 years ago with a law abiding it which allows the government to partner with Private Organizations and non-governmental organizations in the development of both the health and educational sectors of our economy. That has yielded fruits. Why we did that is because we want to make Imo State a health-town State”.

He added “But let me emphasize a little more on this PPP arrangement. By this PPP arrangement, you are expected to manage the Hospitals for the number of years contained in the agreement i.e. 25 years at the first instance. Your performance will now determine whether government will allow you to go for the next 25 years depending on how you have performed.”

In her speech the Commissioner for Health Dr. (Mrs.) Angela Uwakwem said “At the beginning of the Rescue Mission Government, Owelle Okorocha started with the policy of health at your doorstep and soon after, envisioned 27 general hospitals, one in each local government. Today, we are exploring the option of Public Private Partnership into actualizing this goal and making sure that this vision thrives well beyond this government. The issue of founding health is very high and government may not be able to do it alone”.

She stated “Today, we are happy to announce that we have partners who have shown enough willingness to help drive this goal of turning Imo into a health tourist State”.