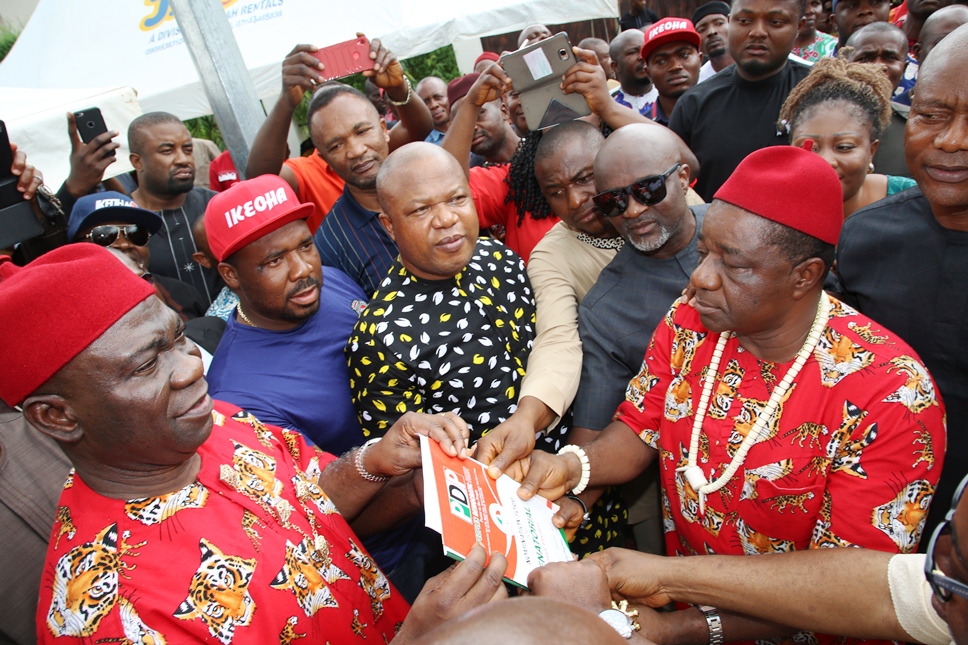 …Says God has been kind to him

The Deputy President of the Senate, Senator Ike Ekweremadu, has announced that he would not seek re-election into the Senate in 2023, noting that God had been kind to him, raising him to address enormous challenges faced by his people.

He spoke on Sunday at an event to mark his 57th birthday and to appreciate God and his constituents for his re-election and triumphs.

Ekweremadu recalled how he became the Chairman of his age grade association at age 10, and served as President-General of Mpu Town Union, pioneer elected Chairman of Aninri LGA, Chief of Staff of Enugu Government House, Secretary to Enugu State Government, fourth term Senator, third term Deputy President of the Senate, and the first Nigerian Speaker of the ECOWAS Parliament”.

He, however, observed that it had not been all rosy as he had also faced serious political challenges and persecutions.

“We are assembled here today to mark the awesomeness of God in my life and to thank you all for standing by me over yet another year of trauma in my politics, including the attempt on my life and lives of my family members, the assault on my liberty, and all the evil designs of the evil people in our society against my person and politics. I have been through the valleys of the shadow of death. I have been scorched and bruised for my political beliefs and determination to defend the principles of democracy and uphold justice for every segment of this nation.

“Indeed, without the almightiness of God and your fidelity, I would not have been here to acknowledge the triumph of God’s grace over the evil intensions of wicked souls in high and low places of our society”.

Ekweremadu expressed happiness over the developments his representation had brought to his people.

“My life and political odyssey are products of divine grace working through destiny helpers like you, for I know where I am coming from. I also know how far the Almighty God has brought me.

“I have also looked back on the last 16 years, which I have represented Enugu West as their Senator and I can only thank God for our accomplishments. I have tried to count our blessings. I have tried to name them one by one. I must confess that I am truly surprised at what the Lord has done for us.

“Our road infrastructure has improved remarkably. The Awka-Ugwuoba-Oji River-Nachi-Udi-9th Mile-Abor-Ukehe-Opi Road, which is our latest intervention in this regard, has just been awarded.

“We have made progress in electricity and water supply to our various communities. We have built, rebuilt, and we are still building and rebuilding schools, churches, health and civic centres, among others.

“Our human capital development projects are on the upward trajectory. We have assisted several of our young people with employment in public service. Through the Ikeoha Foundation, we have supported 3,843 undergraduates with bursary awards, 87 with full scholarship, while over 12,155 women and youth have received basic education courtesy of Ikeoha Foundation Adult Literacy Programme”, he told his people.

Despite the achievements, however, Ekweremadu said it was time to call it quits with the Senate come 2023.

He said: “However, my dear brothers and sisters, you must admit that no matter how melodious a song may be, it will definitely have an end. Therefore, as I thank you for these 16 memorable and splendid years as a Senator of the Federal Republic of Nigeria; as I thank my distinguished colleagues for honouring me as the Deputy President of the Senate for three consecutive times; as we recall the accomplishments of the projects of my representation in the last 16 years; as I acknowledge your kindness in keeping me in the Senate for these 16 years; and as I prepare to further represent you by your mandate for the next four years, let me seek your understanding and indulgence to now announce that this will be my last term as your Senator.

“As we get set for the 9th Senate, be assured that I will focus on the completion of all ongoing projects we attracted and ensure that communities that are yet to benefit from our vision in infrastructure adequately benefit.

“I will work with other patriotic Nigerians within and outside the National Assembly and across party, ethnic, and religious lines to address issues of disunity, insecurity, and poverty currently threatening our nation. I believe that together we can pioneer a new order characterised by peace, justice, unity, prosperity, egalitarianism, and boundless opportunities for all”.

The event was attended by key stakeholders in Enugu, including Governor Ifeanyi Ugwuanyi and members of the National and State Assemblies from the State.