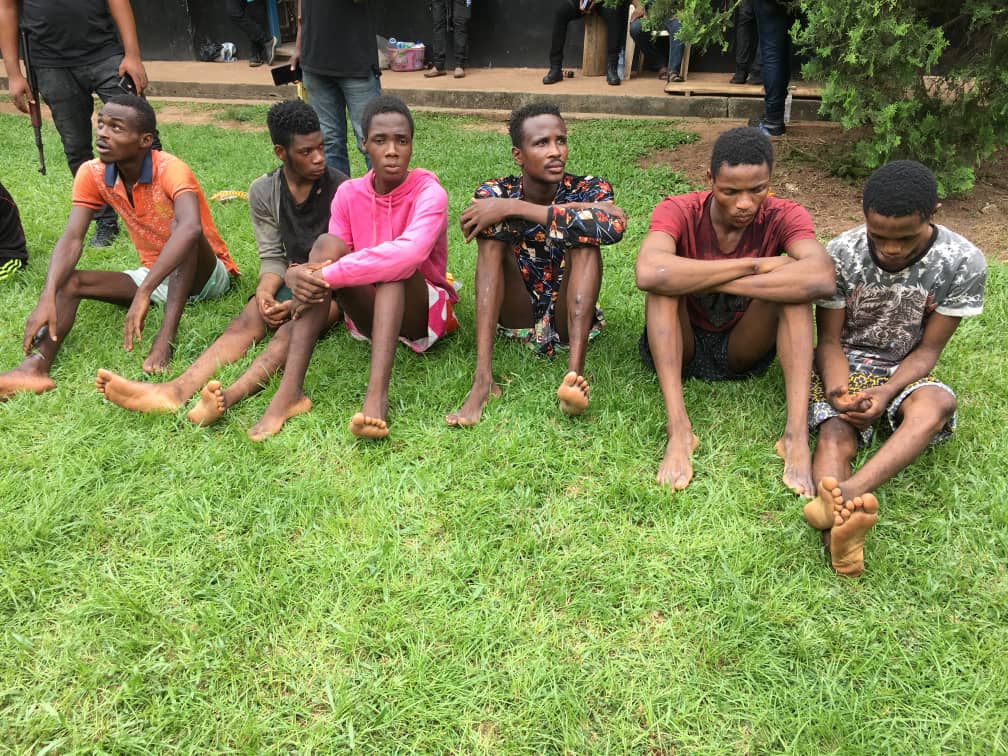 Suspected​ killers of four police officers, including a pregnant woman at the Afuze police station in Owan East local government area of Edo State, were Wednesday paraded by the police in Benin.

The suspects, numbering six, were alleged to have killed the officers, set the station ablaze and set free their colleagues who were arrested for armed robbery in the area.

It was gathered that the suspects were arrested when a police officer searched through Agunu Ernest’s phone and discovered that most of the contacts were police officers.

Ernest was said to have coffesed that the phone belonged​ to one of the officers killed at the Afuze police station.

Speaking with journalists, one of the suspects, Suleiman Omogbai, said Ernest who was arrested by the policee invited them to come and resue them from the cell.

He said it was Abaga that brought the explosives used in the operation, adding that they didn’t plan to kill the officers during the operation, but don’t know what came over him.

“When we got to the station, Abaga who is at large started shooting and we killed the police officers so that we can escape. I killed one of the police, while Abaga locked the police inside the room and killed them.

“Abaga called me that we are going to set free Ernest and three others. Killing was not part of the plan but when we got there, Abaga killed the DPO, that was how we join him. I didn’t intend to kill the offficer but you know gun has a spirit that goes​ with it,” he said.

Also speaking, Omogbai who claimed to be member of Jurist confraternity, said after the operation, he and his group left, while Ernest, Abaga and his group went to attack the INEC office.

On his part, Ernest said he invited Abaga to come and rescue them from the cell but not to kill anyone.

“Paul with whom we were locked up  in the cell together, brought Abaga’s number. We then told the IPO to call him to come and bail us. When he came, we told him to come and rescue us and after two hours, we started hearing gun shot. Not too long, they burst the door open and rescued us. We later got to know that they killed the officers,” he said.

The Commissioner of Police, Mr. DanMallam, assured that the suspects would be charged to court and that no one would escape justice.