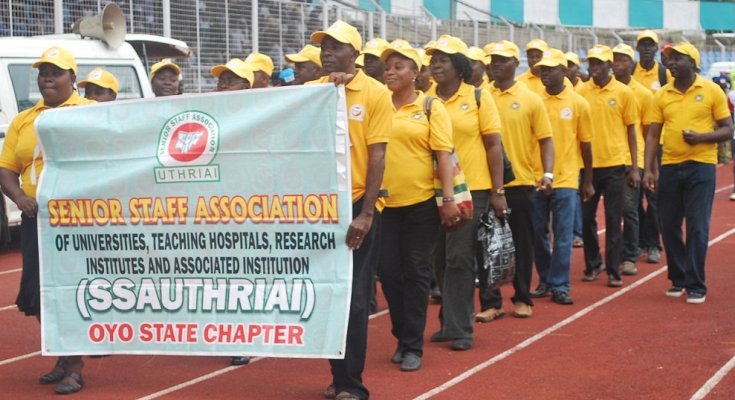 The Senior Staff Association of Universities, Teaching Hospitals, Research Institutes and Associated Institutions (SSAUTHRIAI) has demanded from the Federal Government the fulfilment of its agreement and payment of 12 months arrears of 53.37 per cent salary increase estimated at N8.32 billion.

The agreement, according to SSAUTHRIAI, was reached with its Joint Research and Allied Institutions Sector Union since January 2011.

Although SSAUTHRIAI also congratulated the Federal Government on the successful conduct of the 2019 general elections, the trade union however, “frowns at the spate of killing of innocent Nigerians during the election period.”

“Therefore, the Federal Government should put in place maximum security measures that will guarantee right of citizens to vote without fear of being molested. We sympathise with the Federal Government on the recent killings in various parts of the country. However, the council-in-session calls for maximum security of lives and property in the country”, SSAUTHRIAI stated.

The organisation also called for “the total review of Pension Reform Act 2014, to allow retirees access their lump sum (100 per cent) as well as prompt payment on retirement.”

While appreciating the efforts of the National Assembly and other stakeholders in the passage of the new National Minimum Wage Bill, the organisation frowned at the delay in signing it into law by President Muhammadu Buhari.

The position of SSAUTHRIAI was contained in a communique signed by its sectoral chairman, Felix Uwadiae and secretary, Ademola Olajire, and issued after its sectoral council meeting held at the Institute of Agricultural Research and Training, Ibadan in Oyo State.

The communique reads: “The council-in-session implores the Federal Government to honour the agreement reached with JORAISU since January 2011, which includes the payment of 12 months’ arrears of 53.37 per cent salary increase estimated at N8.32 billion; retirement age of 65 years, release of conditions and schemes of service; increased funding of research institutes; establishment of National Research Institutes Commission and peculiar and earned allowance.

“The council-in-session observed with dismay that despite the favourable the National Industrial Court judgment on the skipping of CONRAISS 10, management of some research institutes are yet comply. The council therefore calls for total compliance with the court judgment”, SSAUTHRIAI stated.