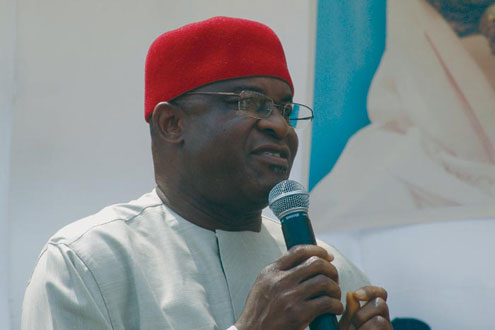 Mark who spoke to journalists in his Otukpo residence lamented that there were electoral violence at Otukpo-Icho and in Otukpo Local Government Area (LGA), Benue.

He explained that some thugs took some ballot papers, tore them and went away with the ballot boxes. “They are local boys here and we know them. I have condemned the case.

He called on security agencies to deal decisively with the perpetrators to serve as a deterrent to others.

David Mark who asked the security agencies to make an exaple of the boys said he does not encourage any form of electoral offences.

“Even though I don’t support the extra judicial killing, I cannot encourage electoral violence of any kind. Certainly not gat som boys should go around disrupting elwctions. That is totally uncalled for. But apart from these problems, it is very impressive.”

He called on INEC to do the right thing by giving the electorate free, fair and credible elections, saying that if the commission does the right thing even the losers would not complain or hold any grudge.

He noted that there was massive turnout of voters in his polling unit and many others in the state where people casted their votes peacefully unlike why happens in he past.

He said that in Edikwu Council Ward, Otukpo LGA the ballot papers that were sent there were bad and in short supply and a certain boy held the unit to ransom and insisted that election will hit hold there.

He also noted that the Ward III polling unit was moved to a new place, emphasizing that the election in that polling unit did not take place as it was cancelled due to some issues.

”INEC should not create more problems for itself. The movement of the polling unit was uncalled for,” he said.

He lamented that it was unfortunate that INEC did not make arrangement for backup of the Smart Card Readers, stressing that they malfunctioned in some polling units and they end up delaying voting.

He further said that some polling units did not have ink pads, stressing that it was a national embarrassment.

”It took INEC four years to prepare for the election, so, some of the hitches ought to have been avoided.

”Anyway, we are a developing nation and that is where we have found ourselves.

”However, on the whole, we are improving in the electoral process. The  enthusiasm of the electorates and the massive turn out to carry out their civic responsibility is what has impressed me,” he said.